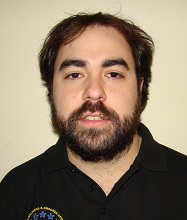 In 2009, Ander created snooker147blog.com, a blog to keep Spanish fans informed in their mother tongue, which soon became the leading snooker site in the country.

His interest in snooker kept growing and in 2013 he qualified as an EBSA Coach under the guidance of PJ Nolan and started working as a full-time snooker coach.

After a couple of months, he has already coached players from different ages and levels and is looking forward to develop snooker in Spain to create future stars.