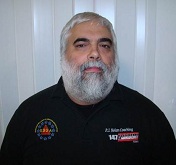 Davide is a EBSA Snooker Coach in Italy. Snooker connoisseur since the 80’s and after meeting Frank Callan he also became passionate about coaching.

In 2013, after spending many years focussing on his artistic career, he established the first Italian snooker academy in Milan, the Ambrosian Snooker Academy.

The same year, the Italian Biliardo Federation gave him the responsibility to promote this sport across the country, nominating him National responsible. He still maintains this role.

In 2015 he received the official EBSA coaching certificate and in 2018 he also became a WPBSA WORLD SNOOKER coach.

He does one-to-one tutoring sessions with numerous students and every year he organises several camps for beginners and more experienced players in association with PJ Nolan.

He is often invited to serve as a commentator for Eurosport Italia. As well as this, he writes articles and textbooks about snooker.