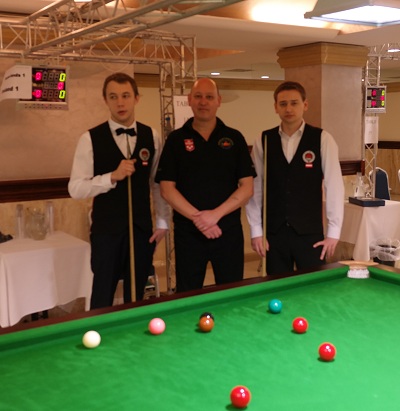 Day six of the Cue Zones organised by The European Billiards & Snooker Association to highlight the EBSA Snooker Coaching Academy was held this morning with players from Austria in the Dolmen Hotel in Malta.

EBSA head Coach PJ Nolan and his team of Official EBSA Coaches are conducting free sessions each morning from 8.30am -9.30am during the 2015 Under 21 and Team EBSA Snooker Championships

This morning PJ and fellow EBSA Coach Kevin Chan from the Netherlands worked with Markus PFISTERMÜLLER and Andreas PLONER on improving their technique and they practiced some routines to improve their cue ball control, long potting and safety game.