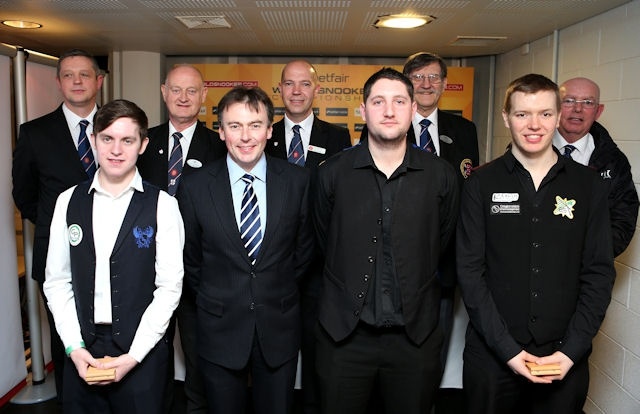 During the season, a series of four events were staged for amateur players, held concurrently with World Snooker European Tour events in Germany, Belgium, Bulgaria and Scotland. The four winners, plus the next eight players on the ranking list, went through to the final play offs, which were staged today at the World Snooker Academy in Sheffield. And the three winners now have tour cards for 2013/14 and 2014/15.

Germany’s 26-year-old Einsle (pictured) edged out Christopher Keogan 4-3 in the final round, coming from 3-2 down to win the last two frames. “It was a very tough match with a lot of pressure,” said Einsle, who is now set for his third spell on the pro tour.

“It’s good to have a German player on the tour and hopefully younger players in my country will see me and start to play snooker. The new format for ranking tournaments next season is great as it could give me the chance to take on top 16 players and get more experience. I would love to play Ronnie O’Sullivan.”

Carrington, age 22 from Grismby, beat Adam Wicheard 4-0 in the final round with top breaks of 71 and 73. “It’s unbelievable to be back on the tour, I have worked so hard for this,” he said. “I had one season on the tour before but got off to a slow start and struggled after that. This time I will know what to expect. This new EBSA tour is a brilliant way to qualify. The way most of the ranking events will be next season with everyone starting in round one is ideal because it gives us all a chance.”

Welsh 19-year-old Jones saw off John Parkin 4-0 with a top run of 66. “It’s brilliant to be back on the tour as the last two years have been hard for me,” he said. “I used to practise with Michael White and watching him this week has inspired me to do better.”