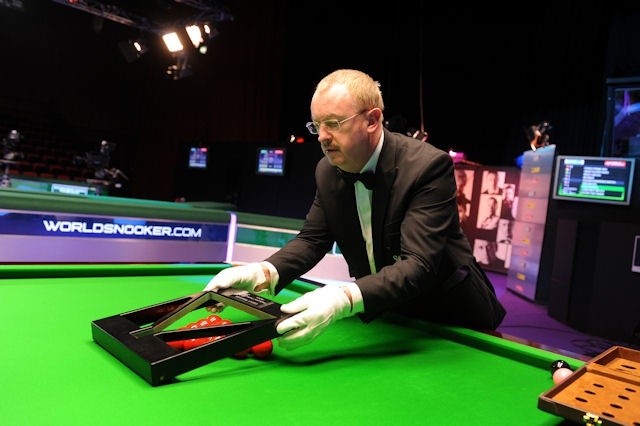 Eirian Williams, one of snooker’s most experienced referees who took charge of four World Championship finals, has retired from the circuit.
The Following is from www.worldsnooker.com…
The 59-year-old from Llanelli first qualified as a referee in 1981 and has been a regular face on the professional tour since 1991. He was the man in the middle for the World Championship final for the first time in 2001 when Ronnie O’Sullivan beat John Higgins, and again in 2005, 2007 and 2010.
The Welshman decided to retire ahead of the Coral UK Championship, which starts today in York.
“I felt it was time to step down and let the younger referees have their time,” said Eirian. “I spoke to my family and decided it was the right time to put away my gloves. I’ve got three grandchildren now and another one to follow in December. Through the travelling I did in the early part of my refereeing career, I missed parts of my own children growing up, and I don’t want to do that with my grandkids.
“I will miss the camaraderie on the circuit and a lot of the people I worked with, as well as the chance to see younger referees come through, having worked as an assessor in recent years.”
Eirian worked as a police officer in Llanelli for 18 years before changing careers. “When I started I never imagined that I would referee a World final,” he said. “Back then it was a closed shop and only the A Band refs were selected for the big finals. I just wanted to give it a go. Refereeing on television for the first time was a big milestone, then doing my first final.
“The 1998 Welsh Open final is one of my fondest memories because it was my first final in Wales and it was won by Paul Hunter. Then of course my first World final was a career highlight, as well as the other Crucible finals. And alongside that I would put the 2006 Masters final when John Higgins cleared up in the last frame to beat Ronnie O’Sullivan – that was in incredible match.”