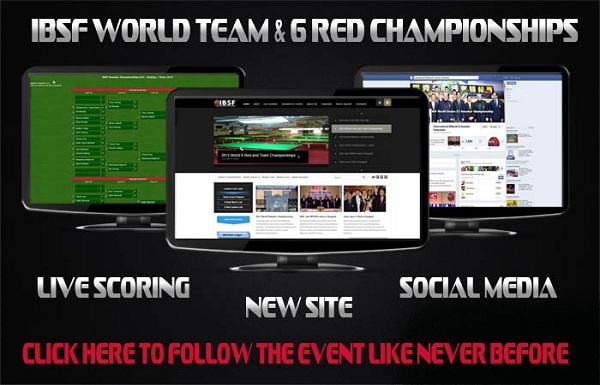 IBSF have just announced the draw for the 2013 World IBSF Team & 6 Red Snooker Championships. The Championship will begin at 10am on the 30th of September and runs until the 6th of October. These Championships will feature the best Amateur players from all around the World and a brand new IBSF Web site has been designed to highlight the Championship in a way like never before with reports, videos and photos on www.ibsf.info.

All Players, Referees and Coaches will be handed the playing Schedule for the events at the tournament meeting in the Dolmen Hotel on Sunday the 29th of September at 18.30 and 19.00. The Championship Opening Ceremony will be held at 20.00 in the Dolmen Hotel and everyone is asked to attend in what promises to be an exciting opening ceremony highlighting Ireland to the world.

Click on the link to view new web site