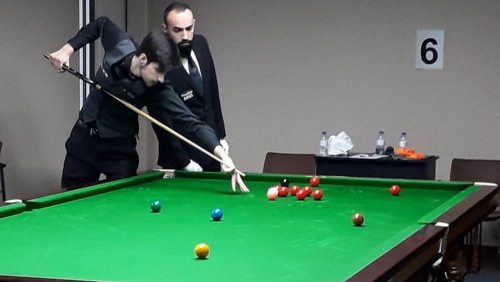 18 years old Guilherme Lemos, a student of Informatics Degree at Coimbra University, oldest one in Europe, and player from the ‘students’ local team, Académica, ended the day at the U18 European Snooker Championships giving the home nation, Portugal, the joy of their first win, and only one in this first day of competition, after drama and a smashing cameback from 0-2 to overcame the German Fabian Haken 3-2.

«It’s an honour to give this joy to my country and all the snooker fans in Portugal. It’s my first time in a top class event like this one, I kept my head cool and things are rolling. Let’s see how it works Sunday», told us the humble and shy Portuguese, who is now one victory away from getting through to knock-out stage, reserved to only 42 of the 70 players who started the big U18 competition at the 16 tables settle at the Salgados Palace Hotel.

Lemos plays Russian Kirill Zhizduk at 10 a.m. and the Zac Cosker from Wales at 4 p.m local time (CET +1), on Sunday, after not being able to win his first match, against the  promising young star from Northern Ireland Robbie McGuigan (0-3), but has all the chances: he’s one win away from Last 42.

A good dessert for Portugal, after Tiago Teixeira and Miguel Ruivo lost both of their matches this Saturday, wining only one frame each. Now, Portugal dreams again. And higher, on the tip of Guilherme Lemos’s cue. Side by side with him, as the huge amount of local fans who attended the event in this first day showed to the all Europe.