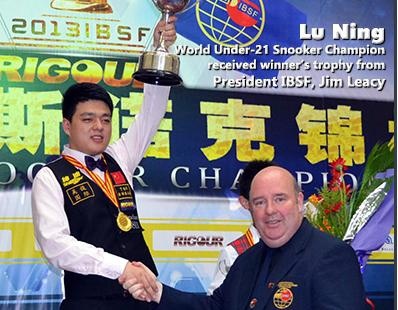 China’s Lu Ning was crowned the World Under-21 Champion in Beijing on Friday thanks to a 9-4 victory over his fellow Chinese compatriot Zhou Yuelong. The home country showed it’s strength in dept yet again with five players making it to the quarterfinals with European involvement and that of Oliver Lines ending in the semi finals of the event 7-3 to Yuelong.

Lines and his fellow England team mate Jordan Windbourne done well getting to the quarters but got paired against each other at that stage with Lines progressing 6-1. In the last 16 we had another representative from England in Ashley Carty while Poland were well represented by Michal Zielinski and Kamil Zubrzycki.

Full results can be found here.