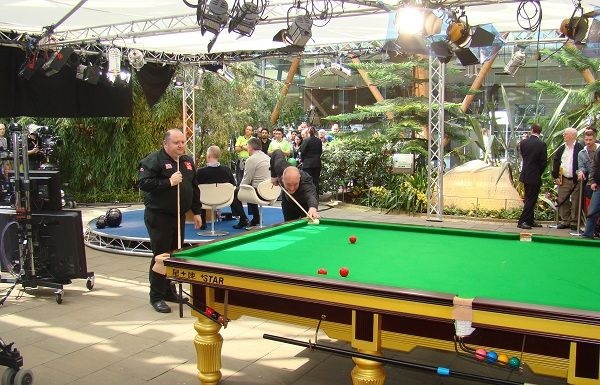 Last weekend our EBSA Head Coach PJ Nolan was invited to be the lead coach at the World Snooker Cue Zone on the opening two days in the Crucible in Sheffield. The Cue Zones area showcase for the general public during their stay at major championships which is also used as a filming area by BBC TV.

The WPBSA is responsible for delivering Cue Zones atTV events with its objective to promote the World Snooker Coaching Programme and to enhance the quality of delivery by its coaches as it will be a shop window for the top coaches to promote themselves.

PJ said the atmosphere around the Cue Zone and the Crucible was electric all weekend and it was an honour to be invited back again by World Snooker to lead the Cue Zone last weekend. I really liked meeting the WPBSA team again and their motto of growing the game is truly working with the amount of players at the Cue Zone this weekend.

It seemed that people from all around the world travelled to Sheffield at the weekend to see the return of the rocket Ronnie O Sullivan in his first round win against Marcus Campbell and to see young Michael White become the real star of the game in his fantastic win over Mark Williams.

The public practiced some of PJ’s training routines and were awarded WPBSA medals and certificates to all who cleared the routine. Some routines were against the clock in speed snooker and some were about the amount of balls potted.

There were some RIBSA Irish winners this year in the Cue Zone with Stephen Walsh from Carrick, Ray Power and Tom O Driscoll from Waterford all winning gold medals in clearing the routines with some brilliant potting displays.

One of the star International players who attended this weekend’s Cue Zone was Tatjana Vasiljeva who is the 2012 EBSA European Ladies Snooker Champion.

Tatjana earlier this year became herself a World Snooker Coach and she cleared a great routine on the table and was awarded a gold medal and certificate by PJ.

If any player or club would like to like to book a coaching session with PJ Nolan who is one of the world’s leading coaches they should email pjcoach147@hotmail.com for his next available date.

The cost of holding a RIBSA session is €20.00 per hour coaching time plus €15.00 per hour travel time from Carlow plus tolls and parking.

If you would like to travel to the Ivy Rooms Snooker Club in Carlow you can avail of a 2hr session for €55.00 which includes Lights, DVD of the lesson and Technique profile.