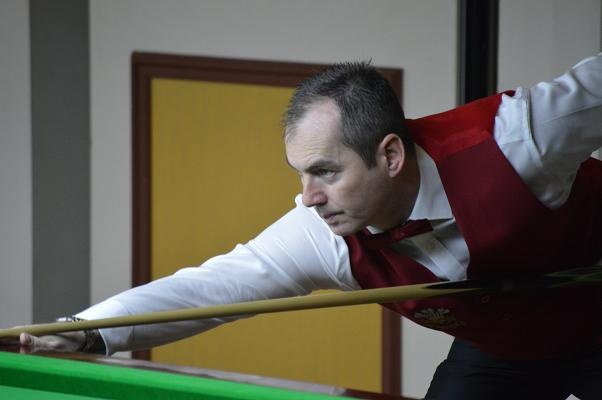 Wales are through to the final of the 2014 European Masters Team Championships here in Bucharest after a 4-1 victory over Ireland this morning.
The team of Wayne Morgan and Peter Roscoe opened up with Roscoe taking the first frame 58-19 against Mark Tuite. Morgan took the second frame 75-8 against Anthony Bonnar and they went 3-0 with a 69-16 win in the Scotch Doubles.
Bonnar rallied with a superb 85 break to pull one back for the Irish but Morgan held out to win an epic last frame on the black to send the Welsh through to the final.
They will face Beglium’s Mario Van Herk and Alain Vandersteen who earlier defeated England’s Jamie Bodle and Michael Henson by four frames to two.
The English took an early 2-1 lead which included a solid 49 break in the Scotch Doubles frame but the 4th frame was an epic one of over an hour and it was eventually Vandersteen who took the frame to draw level at 2-2.
The Belgians took the next frame 87-13 and a 48 from them in the 2nd Scotch Doubles frame got them over the line 4-2 and into their third European Masters Final.