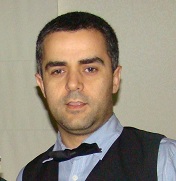 David Vaizman is a full-time Snooker coach from 2002 in all the frame works projects that take place in Israel. David coaches at The Ben Gurion University in Beer Sheva since 2003, and has about 800 students a year doing his course each year.

In 2007 he graduated as an EBSA coach by and Wayne and Terry Griffiths Academy in Wales. David was part of the Israel team which reached the 2012 EBSA Team Championship final.

In February 2013 he completed the IBSF a coaching course in Israel.