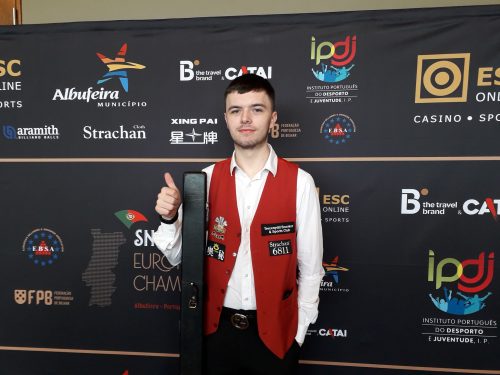 Dylan Emery became the third player to achieve a century in U21 European Snooker Championships going on in Albufeira this Wednesday morning.

The 18 years old Welshman got the benchmark wit a break ok 107 in the opening frame of his match with Northern Ireland’s Colm McGee which he won 3-0 getting also a 57 break on the last frame.

Dylan aims for victory on Portuguese soil and equalizes the best break of the tournament so far with his 107 points immaculate run, equalizing Iulian Boiko as the best one in the competition. Austrian Florian Nussle performed also superbly still on Tuesday signing a break of 100 points.

You can follow all results and updates on the www.ebsa.tv Live-Scoring/Streaming program.