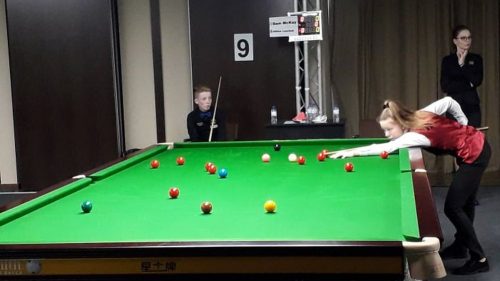 Women’s International Day is recognised worldwide tomorrow, March 8th, celebrating the claiming for voting and same rights and labour conditions in the USA in 1909. In 2020 the U18 European Snooker Championships have in Belarus player Albina Leschuk, aged only 15, the exception that proves the rule: she is the only girl in the 70 competing to became champion.

The one and only female contestant in the competition presents herself in Albufeira with a 70 points break featured in practice, and 42 in competition. The long hair that surprised the crowd that attended Salgados Palace Hotel, most of them wondering if their eyes and senses were not fooling them: yes, it’s a girl.

Albina’s dedication and passion for the game overcame every obstacle in a sport historically  dominated by men. She did not win her first match against Eelis Lappalainen, from Finland, but still attempts to go through to the knock-out phase in Group K of this round-robin stage.

She still has to face Ben Mertens, from Belgium, Sam McKay (Scotland) and Aaron Smith (Ireland) until Sunday night. Tomorrow, don’t forget to buy a rose or flowers to the woman you love most, or take them out for just an expresso, if you cannot buy them lunch and/or dinner. But in the U18 European Snooker Championships, all eyes are on Albina Leschuk.