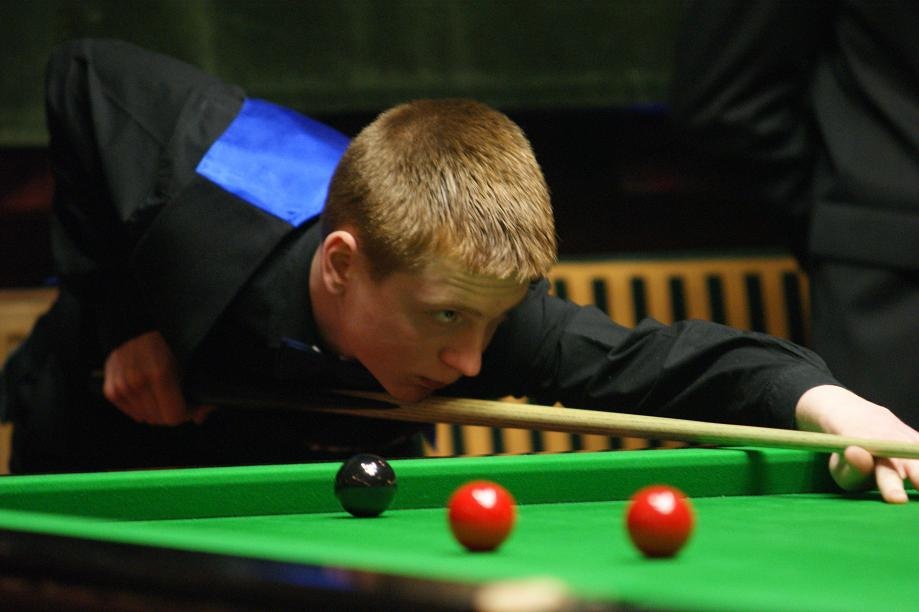 The 4pm session  saw only four matches played in the Mens Section with Ireland’s Robbie Murphy getting his campaign off to a flyer with a 4-0 won over Igor Akisiutin of Russia dropping only 14 points over the four frames and a high run of 63 in the second frame.

Next up in Group E was Sweden’s 17 year old Benjamin McCabe who produced a superb 4-2 win over Jurgen Van Roy of Belgium and the last match saw Grzegorz Biernadski (pictured) from Poland start with a win beating Georgi Velichkov  4-2 with a 74 break along the way.

Group F was the only other Group in action this session and we saw 4-0 wins for both Roy Stolk and John Whitty. Stolk ran out a 4-0 winner over the youngest competitor in the event, 7 year old Iulian Boiko from the Ukraine,  while Whitty beat Thomas Brunner from Germany.

In the Masters this afternoon Urs Freitag of Group A played his second match of the event beating the only female competitor in the Masters Section Malgorzata Sikorska, coming back from 1-0 down to win 3-1. Group E’s Allan Norvark had a comfortable 3-0 victory against Ygal Pagliari and Ireland’s Mark Tuite opened his challenge with a solid 3-0 win over Poland’s Marcin Kolibski.

Welsh duo of Ian Sargeant and John Terry both notched up wins this afternoon with 3-1 wins over Bernard Ballestra (France) and Victor Myroniuk (Ukraine) with Sargeant having to fight for the win after losing the first frame to the French player.

Poland’s Rafal Jewtuch had a solid 3-0 win over Pal Vantra (Hungary) and in the final masters match of the session Rune Kampe of Denmark edged out Germany’s Jorg Schneidewindt in a close 3-2 battle to get that all important first win under his belt.

It was an all Polish affair in the Ladies event as Ewa Pawinska and Weronika Nowicka battled it out this afternoon but it was Ewa who emerged the victor by three frames to one. German favorite Diana Schuler also put her first win on the board with a 3-0 win over Man Melief and Inese Lukashevska saw off Valerie Savonet eventually after a a hard fought 3-2 win having to fight her way back from 2-0 down to take the match.