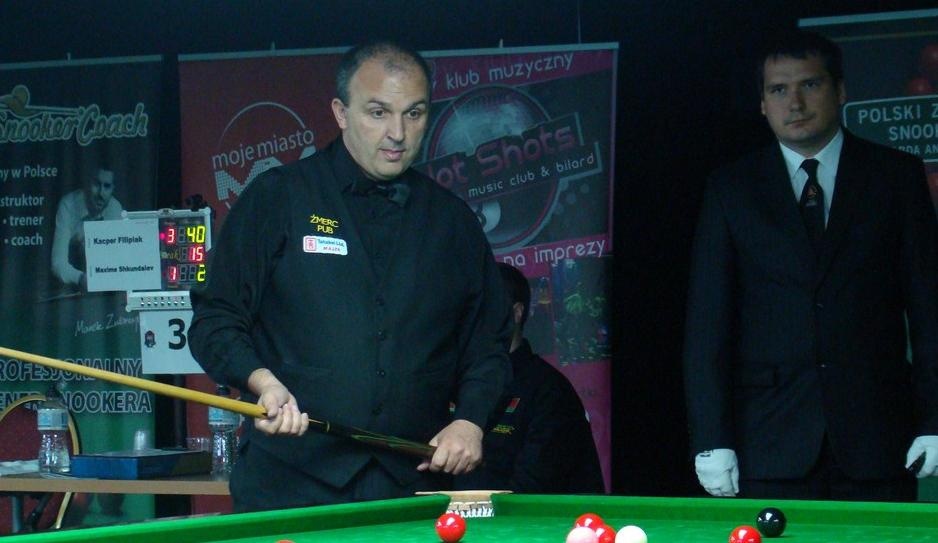 Malta’s Alex Borg will go into the knockout draw as a group winner after his 4-2 final match win over Gareth Allen of Wales this morning in Zielona Gora. The two time ex-champion saw off the youngsters challenge in a hard fought match with his 63 break in the third frame the highest of the match. Gareth will finish up second overall with the rest of the places in group M still to be decided.

Group A had three matches in play this morning and it was Robin Hull’s who finished No.1 after his sixth straight win after he saw off Elran Gezi of Israel 4-0 with breaks of 55 and 58 along the way. He will be joined in the knockout draw by Duncan Bezzina who is almost certain of second spot after he picked up his fourth win beating Danny Eriksen 4-2.

The other two spots are still up for grabs although Duane Jones who won 4-3 this morning should now be safe. This was Duane’s third 4-3 result although this time the youngster came out on the winning side after losing to both Duncan and Robin early on in the week in two very close matches.

David Lilley is another player who remained undefeated in Group B winning his sixth match today beating George Louka 4-2. Lilley led 3-0 but George staged a slight comeback to 3-2 before Lilley finished the final frame out 75-5. Malta’s Mario Brincat now has four wins after beating Davor Bobek 4-0 and should be safe with the other two positions still up for grabs.

Group J top spot was also confirmed this morning with Jason Devaney taking the honors thanks to a 4-1 victory over Tomas Puodziunas from Lithuania. Marcin Nitchske took second place in the group with a last gasp 25 clearance to beat Roy Fernandez 4-3 in what was the deciding match for that position while Lukas Krenek got the final 4th spot thanks to a 4-1 win over Karol Lelek.