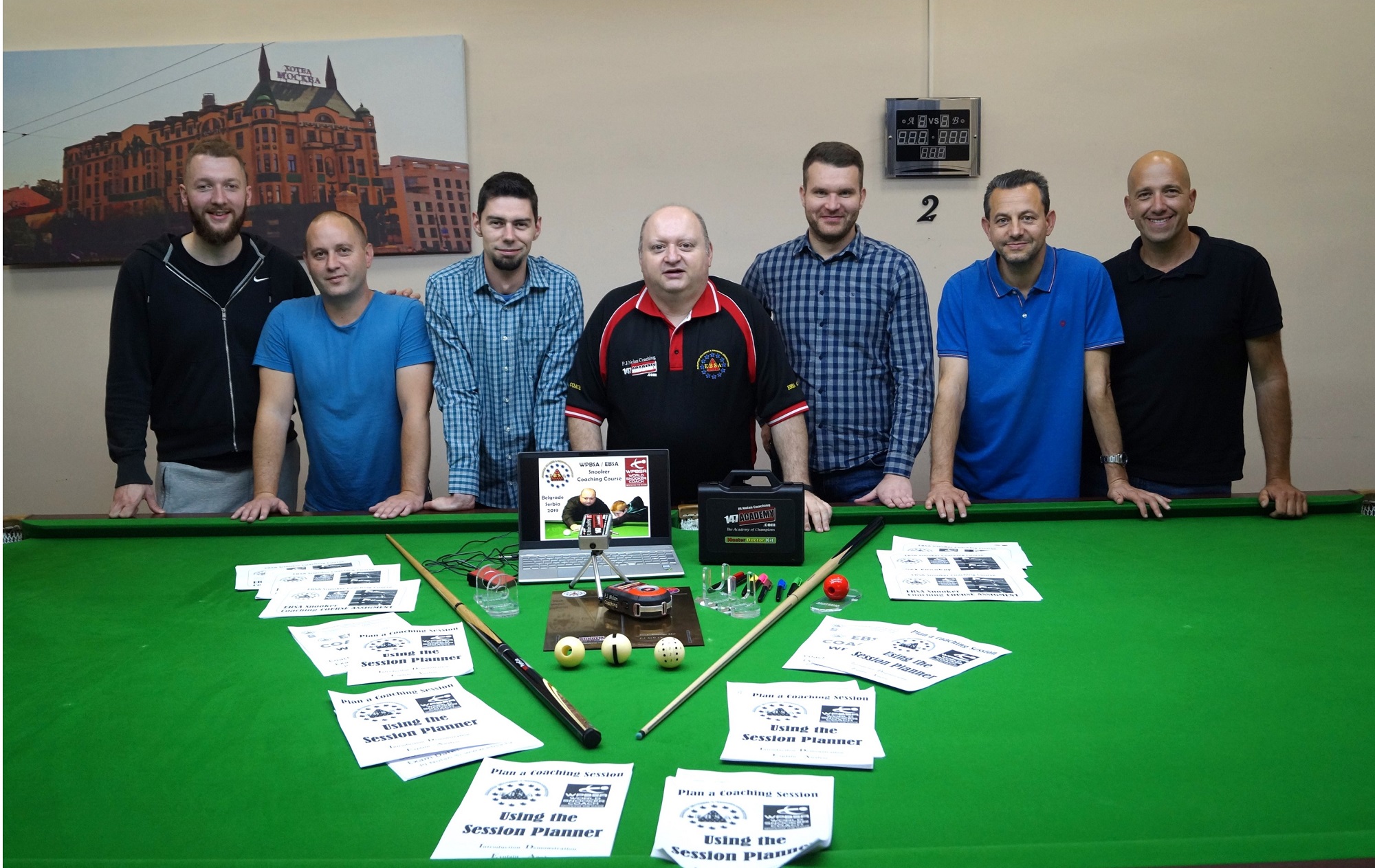 Head of EBSA Coaching PJ Nolan held an EBSA Coaching Course from the 29th – 31st of May to train six coaches on behalf of the European Billiards & Snooker Association in becoming Official EBSA Snooker Coaches in the city of Belgrade in Serbia. The EBSA Coaching Course is only open to recognised coaches who are approved by their own National Governing Body.

This successful course was held during the 2019 European Snooker Championships in the Serbian Snooker Federation Centre and attending this course were Milan Rasljic, Sasa Stojanovic, and Marko Stoilkovic from Serbia, Marc Chouillier from France, Matej Dakol Korosin from Slovenia and Kevin J Vella from Malta.

EBSA Chairman Maxime Casis said ‘’ This accreditation will only go to strengthen our structure in Europe and with three days of intensive training from Head of EBSA Coaching PJ Nolan plus now the addition of Chris Lovell WPBSA Course which includes Safeguarding Child Protection will only make our coaches more qualified on developing the game in their countries.

Chris Lovell from the WPBSA said  ‘’ Working together with PJ Nolan we have created a pathway to support the professional development of coaching within Europe, following NGB’s support a coach can attend the well-established and successful European coaching programme and achieve WPBSA World Snooker Level 1 status thereafter they can access the level 2  1st4sport certificate in snooker coaching delivered by the WPBSA coaching team led by six times World Snooker Champion Steve Davis ’’.

A new training program and manual in each of their language will be developed to help the new coaches to train and guide their players. The coaches will now begin their probation period where they will complete all the necessary assignments to graduate in becoming a fully accredited EBSA Coach later on this year.

The EBSA have now twenty-six countries consisting of seventy-five coaches with full EBSA accreditation promoting the game all around Europe which goes well for the future of the game.

PJ thanked EBSA Chairman Maxime Cassis, Jason Ferguson, Chris Lovell and the Serbian Snooker Association for all their help and wished the six new EBSA coaches the best of luck in developing their coaching skills and completing their homework assignments in graduating as full EBSA Coaches later this year.

Another EBSA Coaching Course and WPBSA Course will be held at the next European U-18, U-21 and Men’s Championships in Portugal. This will allow any NGB Coach to be trained in becoming a EBSA Coach and gain this WPBSA World Snooker Coach Level 1 accreditation.