England’s Nick Jennings (pictured) and Callum Downing played some superb snooker this afternoon as they saw off Ukraine 1 5-0 with Jennings knocking in breaks of 51 and 91 and they also improved on the high break in the doubles with a superb 85.

Ireland also did well in session four today with all three teams recording wins with the only frame conceded that being of young 12 year old Mikhail Terekhov who took a frame of ex-professional Michael Judge during Ireland 1 v Russia 2.

The other Irish mens team of Rodney Goggins and Jason Devaney recorded their second win of the day when they beat Lithuania 5-0 with them having a great 66 in the scotch doubles also. 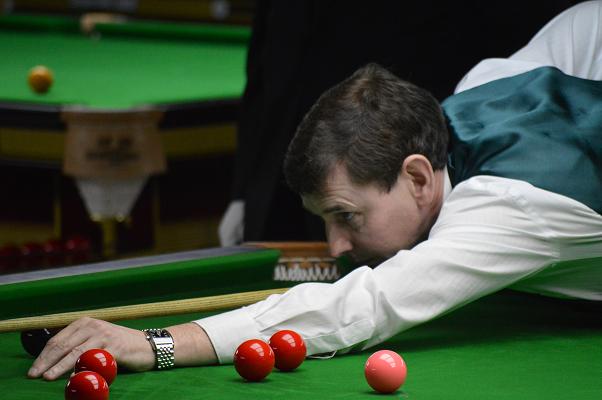 Defending Champions Mark Tuite and Anthony Bonnar (Pictured) won in the Masters section against Romania 5 and they knocked in a great 84 between them in the doubles breaking down on the green.

The only other match finished at present is that of Poland 3 and Romania 2 with Poland’s Marcin Nitschke and Grzegorz Biernadski running out comfortable 4-1 winners.