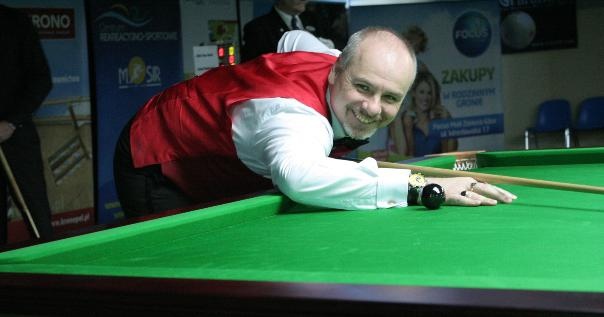 Darren Morgan beat Mario Van Herk this morning 3-0 with breaks of 52 and 62 to secure his No.1 seeding in the draw for the knockout stages. The defending champion finished top of the group with four wins with Van Herk finishing as runner up in the group ahead of Peter Bertens in third.

The other match in the group saw what was essentially a playoff for fourth place between Jacek Rudowicz (Poland) and Marius Ancuta from Romania with the pole running out a 3-2 winner after fighting his way back from 2-1 down to secure his place in the knockout draw.

Group B was also in action this morning with Ireland’s Nigel Power coming back from 2-1 down to defeat Yvan Van Velthoven 3-2. Nigel opened with a 50 break in the first frame only for Yvan to level at 1-1 before knocking in breaks of 53 and 47 to take the third frame. Nigel however controlled the next two frame winning them 63-9 and 65-0 to take the No.1 spot in the group just ahead of Van Velthoven.

With Urs Freitag already safe in third spot it now comes down to Malgorzata Sikorska and Darius Bublys for the final qualifying spot however the match could not be finished in time this morning and will be brought back on after the 1pm session.