Play got underway this morning in Zeilona Gora as the first session of the 2013 European Championships got underway.

Two of the mens groups were in action this morning as Ex-Champions Robin Hull and David Lilley notched up their first wins.

Group A saw Hull defeat Poland’s Patryk Maslowsk by 4 frames to 1 as the Finish player knocked in breaks of 51 and 54 along the way to open up his account in the event.

We also saw wins for Danny Erkisen and Duane Jones (pictured) this morning in this group as Jones showed why he will be a force to be reckoned with this year with breaks of 76 and 86 in his 4-0 victory over Portugal’s Paulo Pereira.

Group B saw the other former champion Lilley lose his first frame to Finland’s Antti Mannila this morning but experience showed in the end as Lilley settled into the match and won the next four frames with ease including breaks of 52, 61 and 62.

The only other match in this group saw Cypriot George Louka defeat Croatia’s Davor Botek four frames to one with a break of 52 for Louka along the way.

In the Masters section Mario Van Herk was on form this morning with breaks of 50 and 68 helping him to a 3-0 victory over Romaina’s Marcus Ancuta while Holland’s Peter Bertens also picked up a win in this group beating Poland’s own Jacek Rudowicz 3-1.

This is the group of defending champion Darren Morgan who didn’t play yet so Mario and Peter will be happy to get wins under their belt before having to play the No.1 seed. 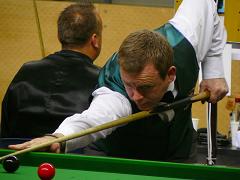 There was also one match in each of Group D and H with Scotland’s Craig McGillivary defeating Peter Varga 3-0 and Costas Konaris in fine form knocking in breaks of 42 and 53 in his 3-0 victory over Richard Kornberger of Austria. 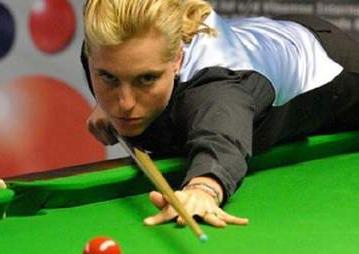 Two of the favorites for the Ladies Championships this year got their title challenge off to a good start this morning with both Wendy Jans (pictured) and defending champion Tatjana Vasiljeva both recording 3-0 wins over their opposition.

Tatjana wasted no time seeing off 17 year old Dalia Alska from Poland while Wendy scored very heavy in her 3-0 win over 11 year old Oliwia Lachawicz who I’m sure will have learnt a lot from playing the multiple time ex-champion.

The host county however did have reason to celebrate when Malgorzata Sikorska ran out a 3-0 winner against Hungary’s Nikoleta Nikolva in Group A where Germany’s Diana Staeczny also put a victory up on the board as she saw off another promising junior in Russia’s Olga Ustinova.

The final match in the ladies section saw Russia’s Anastasia Nechaeva never in any real trouble in her 3-0 win over Eva Torok .