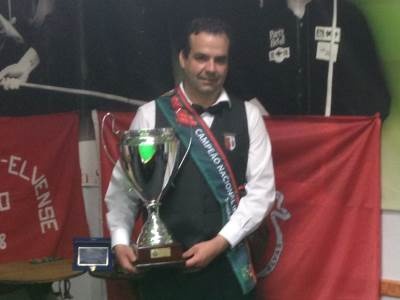 After four defeats in his previous matches in Group M, Portugal’s 2013 national champion João Roque, aged 42, managed to achieve this monday the first win for his country in this 2015 European Snooker Championships.

The portuguese player defeatead Mihai Mesesan (Romania) 4-2 in his farewell match in the event that will end next 13th in Prague, and made history: he became the second ever to get a victory for the nation in 24 editions of the European Snooker Championships.

Roque followed the footsteps of his teammate in SC Braga Paulo Pereira, who got a win in 2010, when the event took place in Bucarest (Romania) and be then lost in the deciding frame (3-4) to a  small belgian teenager called Luca Brecel.

«I’m happy. It’s dedicated to all who love snooker in Portugal, and believe me they are many. I could have won two other matches that I lost 2-4, no chance of going to Last 64 but still I have a story to tell my grandchildren, one day. Only hope this was only the second of many wins of a country crazy about billiards for ages», told us João Roque.

Besides him, Portugal brought to this 2015 European Snooker Championships the 2014 national champion, Rui Ribeiro Santos, who still has two matches two play, without having won a single frame in the three played before.