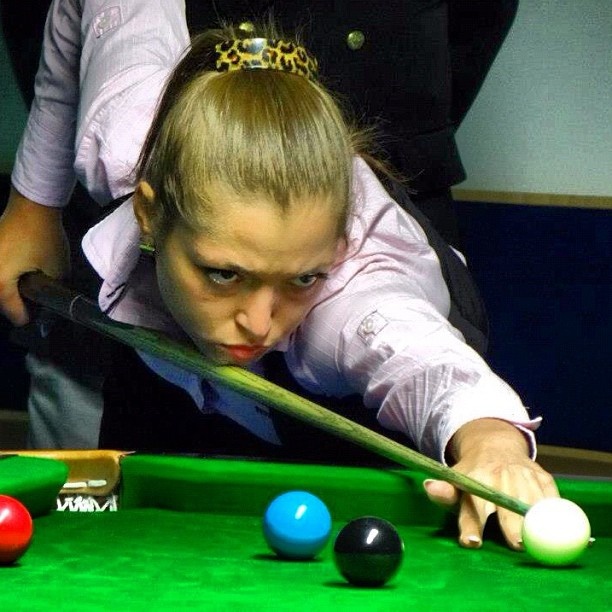 Team Russia 2, composed by Irina Gorbataya (pictured) and Svetlana Kozryreva, beat this Tuesday Team Germany 2 (Diana Schuler/Stefanie Teschner) by 4-2 and assured that the two teams from the country that started among the 10 participating in this European Snooker Ladies Teams Championship event in Malta will be this Wednesday in the semifinals, and even can dream with a possible 100 per cent Russian decisive game.

Gorbataya and Kozyreva will now face, in the semis, Team Germany 1 (Diana Stateczny/Jennifer Zehentner), while, in the other match of Wednesday morning session, Team Russia 1 (Daria Sirotina/Anastasia Nechaeva) will meet Poland (Malgorzata Sikorska/Aleksandra Vojtecka), who beat France (Valerie Savonet/Christelle Pedat), by 4-3, after a five hours match.

Russia 1 and Germany 1, as group winners, were already qualified for the semifinals, and only can face each other in the Grand Final of the event, to be played on Wednesday (14.30 hours local time, 1.30 p.m. in the UK).

All knockout Ladies Teams stage (quarterfinals, semis and the Grand Final) are played best of seven frames, with only 10 reds on the table. Semifinals will be played Wednesday April 1st, in the morning session in St. Paul’s Bay, starting at 10 hours local time (9 hours in the UK), at the Dolmen Resort Hotel, in Malta.

RESULTS OF THE TWO QUARTERFINALS MATCHES: