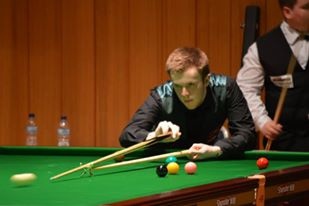 A total of 20 players already got the ticket for next phase of the U21 European Snooker Championships that are taking place at St. Paul’s Bay, Malta, before the end of the second day of competition.

In the 16 groups, the first four go through. And the 16 winners will be seeded in next round, where can only fit 64 of the 90 players who started the event. Which means that there are only 44 chairs left for Monday and the end of round-robin stage.

In Group A, Josh Boileau (Ireland) and the german Felix Frede can relax for a while. The same happens with Benjamin McCabe (Sweden), in Group B, and israeli Shachar Ruberg (Group C).

Scotland is in good shape, with Chris Totten already qualified in Group E, while Darryl Hill (Isle of Man) and Jeff Jacobs (Belgium) got their visa for next phase too.

England fights back with Louis Heathcote in Group R, like the german Lukas Kleckers. Another english player, William Lemmons, is also flying in Group L, like Luke Garland in Group M.