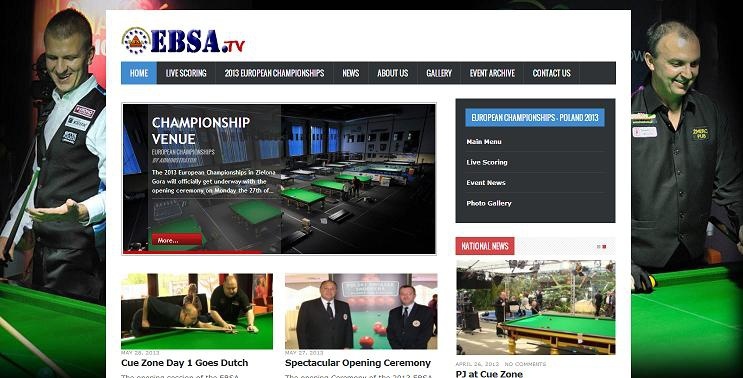 This new site along with the superb live scoring system from Dariusz Goral is now up and running and ready to bring you all the news, photo’s, video and live scoring from the 2013 European Snooker Championships in Zielona Gora, Poland over the next couple of weeks.

The championships will get underway on Monday with the opening ceremony and then kick off the play on Tuesday when Europe’s finest amatuers will battle it out for the Men’s, Masters and Ladies title of Champion of Europe.  There will be many familiar names in the men’s draw including previous champions Alex Borg (2005 & 2006), Kristjan Helgason (1998) (pictured below), Robin Hull (1997) and England’s David Lilley (1995).

However there will be plently of players willing and capable to challenge these to the title over the 10 days play including a strong representation from the Home Countries with both Wales and Scotland sending some very expreienced youngsters in the likes of Jones, Allen and Taubman from Wales and Collumb and Clark from Scotland although Ross Muir will now be missing after qualifying from the Q School. Ireland will also be represented well by Robert Murphy, Jason Devaney and John Sutton while Lilley will be joined by Jeff Cundy and John Whitty from England.

Continetal Europe will also have quite a number of capable contenders with the likes of Lippe (Germany), Bullen (Belgium), Stolk (Holland) and Fernandez and Ruberg from Israel. The host country however will be hoping one of their contingent will be lifting the cup infront of  home support come Thursday the 7th of June with quite a number of expeienced players amonst there ranks.

The Masters as always will be a tough one to win unless your name is Darren Morgan. Morgan has now won the title four times in the last six years but yet again there will be no shortage of players lining up to have a shot at taking him down. Ex-Champion Alan Trigg is representing Ukraine again this year and he along with the likes of Ireland’s Mark Tuite, Scotland’s Graig MacGillivray, Belgium’s Yvan Van Velthoven, and home favourite Rafal Jewtuch will be among a long list of top players eager to challenge.

Then in the Ladies Event we will see the likes of defending champion Tatjana Vasiljeva face off against some familiar names in Wendy Jans, Ewa Pawinska, Inese Lukashevska, and the russian contingent of Irina Gorbataya, Anastasia Nechaeva and  Darina Sirotina among others.

The draws are now live on the site and we look forward to meeting old and new friends alike when the competitors arrive in Zeilona Gora from this Sunday on.