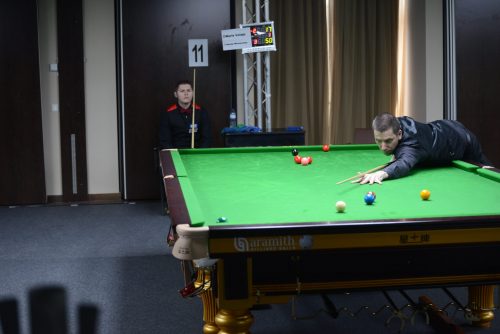 Ten countries are still on the run to have next European Snooker Champion in Albufeira as the Last 16 Round of matches to be played best of 7 Frames just started at Albufeira’s venue.

Five players from England and three from Wales rise from the pack. And with Rory McLeod facing his fellow countryman Daniel Womersley, England as granted a minimum of one in the quarterfinals to be played from 4 p.m. also this Wednesday at the European Snooker Championships Men/Mixed Event.

Ben Fortey facing Andrew Pagett in a 100 per cent Welshmen clash also assures their country will have at least one competitor in the next round… and there’s also Rhydian Richards.

Quarter-final matches of the Albufeira’s Men/Mixed tournament will also be played also this Wednesday afternoonbest of 7 Frames with three clashes scheduled for 4 p.m. session and one for 7 p.m.

The semis wil to be played also best of 7 Frames on Thursday as the Final, to be played Best of 9 Frames. You can follow all results and updates of the competition on the www.ebsa.tv Live-Scoring/Streaming program.