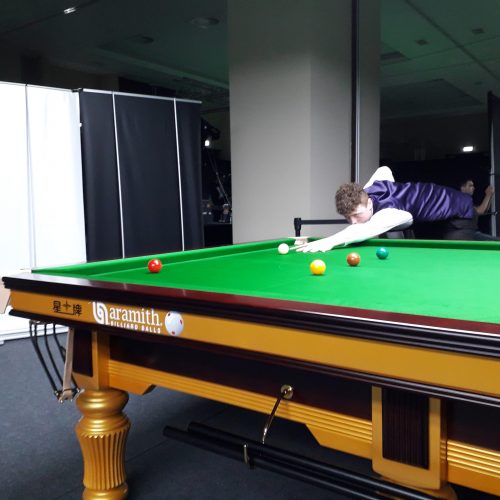 This Wednesday Last 30 Round matches of this 2020 European Snooker Championships Men/Mixed event are already on the run in 14 of the 16 tables at Albufeira’s venue.

As the two best players in the round-robin stages Welshman Andrew Pagett and Finland’s Heikki Niva are already qualified for Last 16 round matches to be played from 1 a.m. also best of 7 Frames.

The quarter-finals will be played also in this day best of 7 Frames at Salgados Palace Hotel starting three of the four clashes from 3 p.m. and the last one scheduled for 7 p.m.

Quarter-final matches of Albufeira’s Men/Mixed tournament will also be played tomorrow march 18th best of 7 Frames with three matches scheduled for 4 p.m. session and one at 7 p.m.

The semis will be played also best of 7 Frames on Thursday as the Final, to be played Best of 9 Frames.

A team from EuroSport is already recording at the venue on Table Tv (Table 1) seven matches of this European Championships in Salgados Palace Hotel to broadcast them all over the world next week.

They started this Wednesday morning with Ukraine’s Iulan Boiko and Hungarian Zsolt Fenyvesi’s match and will also tape one match from Last 16 Round, two classes from the quarter-finals, both semis and the Final.