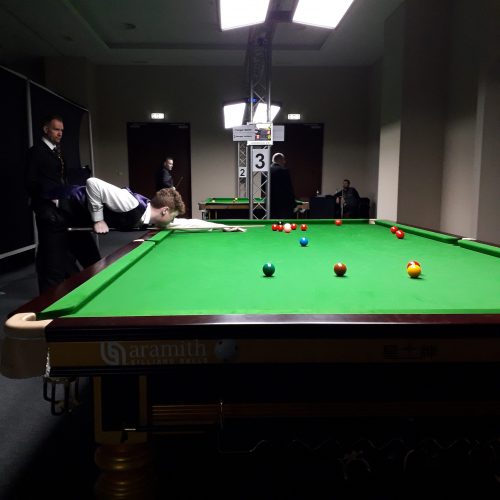 Only 30 of the 59 competitors went through to the knock-out stages after this Tuesday round-robin matches of 2020 European Snooker Championships Men/Mixed event played this Tuesday.

Quarter-final matches of Albufeira’s Men/Mixed tournament will also be played tomorrow march 18th best of 7 Frames with three matches scheduled for 4 p.m. session and one at 7 p.m. The semis, to be played still best of 7 Frames, and the Final, already Best of 9 Frames will happen on Thursday with the decisive match.

48 hours and 29 matches still to go on Albufeira to find the new European king after Poland’s Kacper Filipiak’s victory in 2019.

A team from EuroSport will be in Salgads Palace Hotel recording at the venue a total of sevem matches: one from Last 30 round, another one from Last 16 round, two quarter-finals, both semis and the final. The matches will be broadcasted all over the world by the sports channel next week.