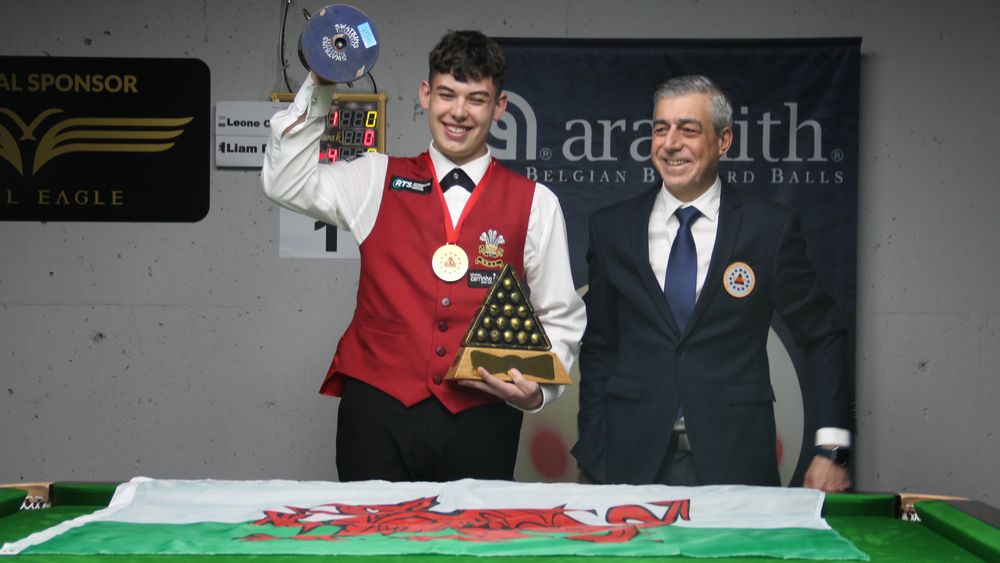 An humble person, an impressive boy, an astonishing player aged only 15. While the party started in Wales and on his Tredegar hometown, the Davies family celebrated in a blink of an eye Liam’s victory in the U18 event at the 2022 EBSA European Snooker Championships at Shengjin’s Delfin Resort this Thursday after defeating Ireland’s Leone Crowley by 4 frames to 1 in a final.

The reason? The New U18 european snooker champion had another match waiting for him – such as also Leone Crowley – in the U21 event. And the next match is always the most important even if are now a continental king, a crown that made Liam smile.

«Lots of sacrifices, dedication, love from my family and my girlfriend, Charlize. I owe it mostly to them and their patience with me. I live play snooker and want to do much more in this sport I love», told a smiling Liam, surrounded my Cymru happiness in Albania: his parents, Leighton and Clair, but also 11 years old brother Ryan were just aside.

«I hope it will be only the first of many more still to come. I simply love to play, and winning tastes wonderfully. I hope the ‘guys’ in Tredegar celebrate, too», said a teenager «over the Moon».

The man of the moment did not forget all the knowledge and counselling he was got from The Welsh Potting Machine, the three times World Snooker Champion Mark Williams, in which club Liam – like Jackson Page – practices regularly in a daily basis. «Mark has been fantastic with all of us. Priceless tips and always available. I love to practice there, as I do at the Scala Club. He is a real champion and inspiration for us all», concluded a busy Liam Davies, who’s now playing U21 event, will enter Last 16 round at the U16 event… and will still play the Men and Men’s Teams event at the 2022 EBSA European Snooker Championships in Albania.