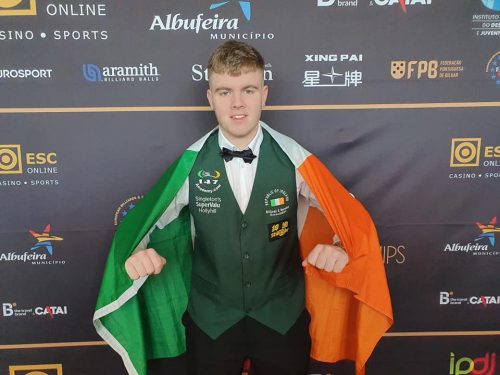 U18 European Snooker Champion in 2019 and 2020, Irishman Aaron Hill, aged 18, is one step away from claiming a second crown in two events at Albufeira’s event after claiming a 4-1 victory over the Belgian Ben Mertens in the 2nd semi-final of the U21 tournament.

A repetition of one of the U18 event semi-finals between the same players, with the same outcome, but in the younger tournament, played previously here in Albufeira the Irishman won 4-0.

A fantastic run for Hill with 16 matches played and won in both competitions, U18 and U21: the Irishman won 30 frames and lost only five in his 9 wins in the U18 event and another 7 wins having won 25 frames, to only 4 he has lost in U21 event. An outstanding total of 55 frames won in 64 played by Hill makes him Albufeira’s star so far.

Enghlishman Hayden Staniland overcame Frenchman Brian Ochoiski in the decider before this Saturday on semi-final 1 to book the first chair in this Saturday 6. P. m. U21 European Snooker Championships final to be played best of 9 frames.