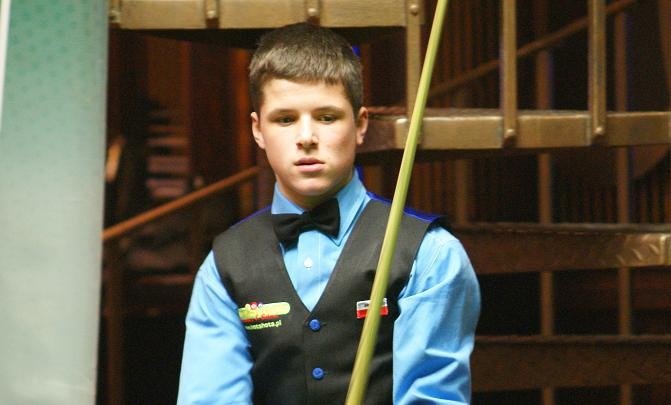 Poland’s 15 year old Mateusz Baranoski turned up the heat in Group G as he defeated Michael Collumb 4-3 in a superb match tonight in Zielona Gora which included a fantastic 132 break by the youngster. The young pole started the match slowly going 2-1 down to the Scot but leveled at 2-2 before knocking in the second highest break of the tournament to go 3-2 up.

Collumb leveled the scores to force the decider but it was the youngster who finished out the match to seal a great win and make things very interesting in the group. I say that because over on the adjoining table group leader Shachar Ruberg was defeated 4-3 also by Germany’s Roman Dietzel.

Dietzel went 2-0 up only for Shachar to level at 2-2 and then it eventually went to the decider where the German knocked in a great 77 break to take the win and leave all four players mentioned on two wins a piece in what should be a very interesting finish to the group. The other match in the group tonight went the way of Mindaugas Maisiejus 4-0 against Vitalii Kalinin.

Another group with some close matches this session was Group H which saw group leader John Sutton brought all the way to the wire by Swede Mats Eriksen who fought his way back from 3-1 to 3-3 before Sutton closed the match out. Sutton also notched up a great 118 in the third frame as the high breaks start to fly in here in Poland.

Another good win tonight also for Antonis Poullos (Cyprus) who defeated Poland’s Adam Stefanow 4-3 with the last match in the group tonight going the way of Francisco Rodriguez of Spain who beat Ken Pedersen 4-2 in a long hard fought match. Sutton now joins Poullos on three wins each at the top of the group.

We also had wins tonight for Roy Fernandez 4-1 over L Krenek, Roy Stolk 4-2 over Kamil Zubrzycki, Robert Murphy 4-0 over Georgi Velichkov, Benjamin McCabe 4-0 against Igor Akisiutin, Andres Ploner over John Whitty with Andres now on three wins from three. Thomas Brunner also saw off young 7 year old Iulian Boiko 4-2 although Boiko had lead 2-1 early on in the match and at only 7 years of age should definitely be one to watch for the future.

One match also saw Sasa Novak surrender a 3-0 lead only for Pawal Rogoza to level at 3-3 before Novak finally clinched the win.

Ireland’s Jason Devaney also put in a good performance tonight beating one of our hosts Marcin Nitschke 4-1 with breaks of 57 and 104 helping him to the win despite an effort of 91 from Nitschke winning him his only frame.