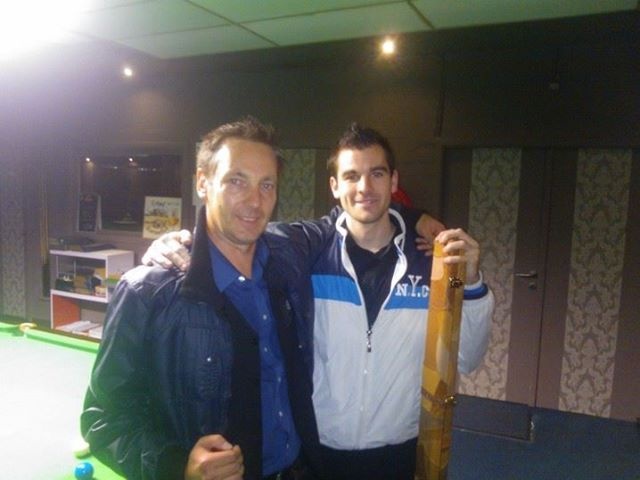 Last weekend the second Belgium Ranking of the season was played in Trianon (Kontich) and Buckingham (Mol). The tournament had 132 participants, Jurian Heusdens  had the high break of a 110.
In the last 32 there where already some striking results. Top seed Kevin Van Hove lost his first match to qualifier Tan Wang Chooi with 3-1 after being 1-0 up. Michel Groessens defeated seed nr 3, Peter Bullen, in a very exiting match after making a 58 in the decider.  Also Alain Vandersteen en Mario Van Herk, who recently played the final of the IBSF Masters World Team Championchips in Carlow,  got beaten in their first match.  Alain lost to 2Q-coach Steve Lemmens, who has found the taste to play Belgium Rankings events again.  Pascal Durnez  won a very close encounter against Mario Van Herk with a scoreline of 3-2 tp proceed to the last 16.
In the last 16 former under 21 international Jurian Heusdens beat Michel Groessens 3-1 with breaks of 110 and 44. Luc Heirewegh showed his good form to beat Van Velthoven 3-1. He went 2-0 up with a 46 break in the first frame,  Yvan then responded with an 82 break to make it 2-1. Luc then confertably took the 4th. Lemmens beat Durnez 3-0 with breaks of 81,37 and 33 and Tom De Wit beat Pascal Raes 3-2 after making a break of 80 in the second frame.
The quarter finals threw up some interesting matches since most of the top seeds already have been eliminated.  The 1990 IBSF runner-up Lemmens ended Tan Wang Chooi’s great run after beating him 4-1 to claim his spot in the semis. Tomasz Skalski (4) had a narrow win of 4-3 against Tom De Wit (5). Luc Heirewegh continued his good run beating Jurgen Van Roy 4-2. The last quarter final seen the pairing of Tim Jonkers and Jurian Heusdens where Jurian had  breaks of 65 and 52 in frames 2 and 3 to have a 4-1 victory to claim his semi  final spot.
In the semis Tomasz Skalski had to play his coach Steve Lemmens. The coach showed he was the master against his pupil and won 4-2. In the other semi Jurian took the 1st frame with a break of 41. Luc then took the next 2 with breaks of 34 and 31 before Jurian leveled the match with a run of 91. The next 2 frames where shared before Jurian managed to win the decider.
In the final Lemmens had to play Jurian Heusdens, another one of his students. Jurian started very well by winning the 2 opening  frames.  Steve replied with a break of 81 to reduce his deficit to 1 frame.  Jurian took the 4th and made a 65 in the 5th to extend his lead to 4-1. Steve then fought back taking the next 3 frames with a top run of 66 to level the match at 4-4. In the deciding frame  Jurian kept his nerves together to win his first Belgium Ranking ever.
All matchresults can be found at the following linkhttp://www.bbsa-snooker.be/nl/tornooien/resultaten/135/belgium-ranking-2