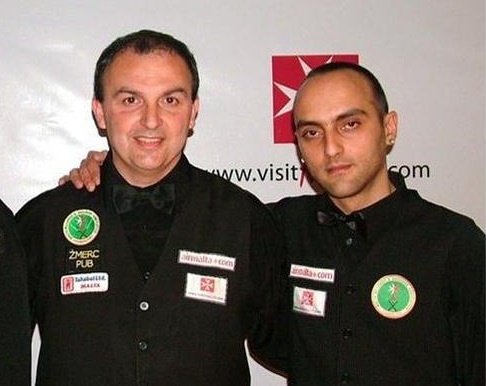 Malta’s Duncan Bezzina came out on top of an epic struggle against young Welshman Duane Jones this afternoon in what was the game of the session. Jones opened up strong with a 68 in the first frame only to lose the next three frames in a row to trail 3-1 to the experienced maltesse player.

Jones rallied however and took the next two frames with the help of a 54 and superb 125 however Bezzina held his nerve to take the final frame 71-30 for a superb opening win.

David Lilley was also in action in this group this session and he had a much easier time of it as he dispatched Davor Bobek from Croatia by four frames to nil in just over an hour compiling breaks of 67 and 102 along the way.

We also saw a quick 4-0 victory for his countryman Jeff Cundy as he put up his second victory of the championships with a comfortable win over Bruno Repanic also from Croatia with a high run of 78.

Malta also picked up another win with Mario Brincat defeating Maciej Relich from Poland 4-0 while the other two matches in the mens sections saw wins for Maurice Le Duc and B Krastev .

In the Masters section European Team Champion Anthony Bonnar finished off his match with Ygal Pagliari in only 45 minutes to record his second win thanks to breaks of 41 and 71.

Also in Group E Stephane Ochoiski came back from 2-1 down to see off the challenge of Denmarks Allan Norvark to win his first match of the event.

Also notching up wins this afternoon was Alan Trigg, Rene Dikstra, Thomas Damm and Craig MacGillivary who scored heavy with breaks of 48 and 69 in his match against Germany’s Michael Eheim.

Both Ewa Pawinska and Anastasia Nechaeva recorded comfortable wins over Eva Torok and Claudia Weber respecively to put them on two wins a piece in Group C in what should be a good battle for top spot come the end of the week.

The only other match finished at time of publishing was a 3-1 win to Roberta Cutajar over Stefanie Teschner with Roberta taking the match after trailing 1-0 early on.