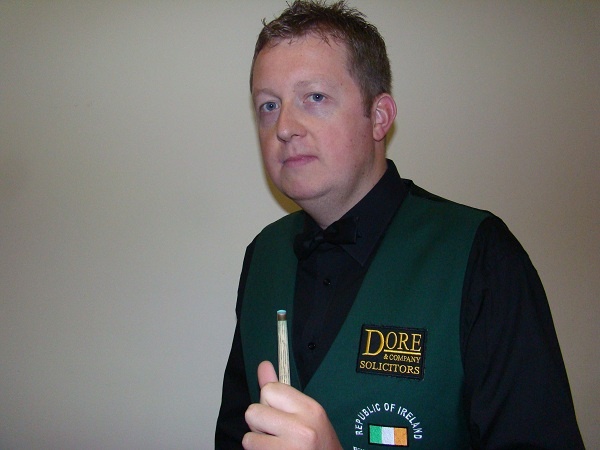 Ireland’s Robert Murphy fought back from 2-1 down today against Benjamin McCabe from Sweden to eventually win 4-2 knocking in the highest break of the tournament to date, a superb 133 break. Murphy found himself trailing early on to the impressive 17 year old but the 133 break in the 4th frame spurred the Irishman on and with the help of a 66 in the next he took that frame and the last to get over the line and get his second win on the board. 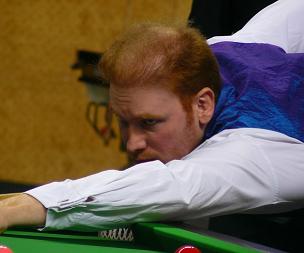 There were four more Men’s matches this session and it was Sasche Lippe who overcame his defeat yesterday to put on an impressive scoring display against Murat Ayas (Switzerland). The German compiled breaks of 51, 61, 53 and 89 on his way to a 4-0 victory to get his campaign back on track. We are still waiting for the Schopf / Petrov match to finish but the other match in that group saw Group favorite Rhys Clarke put up another good win beating Sasa Novak 4-1.

In the Masters we saw another top notch display of scoring from Mark Tuite as the Irishman saw off Richard Kornberger 3-0 thanks to breaks of 45, 46 and 63. His Irish compatriot Nigel Power also recorded his second win of the event beating the only lady player in the Masters event, Malgorzata Sikorska by three frames to one.

Group F saw Ian Sargeant knock in breaks of 56 and 58 during his 3-0 win over Laimonas Aldonis and in Group G there were two solid 3-0 wins for both John Terry and Rune Kampe. 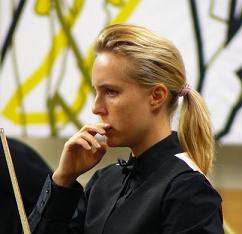 Wendy Jans was back in action in Group B taking her second 3-0 win of the event and now also leads the high break board with an effort of 66 in her win over Isabela Morsk from the host country Poland.

The other two games saw mixed results for two of the other tournament favorites Inese Lukashevska and Daria Sirotina. Manon Melief from The Netherlands produced a solid display to beat the Latvian, Lukashevska 3-0 in three close frames while Daria ran out a 3-0 winner over Valerie Savonet.