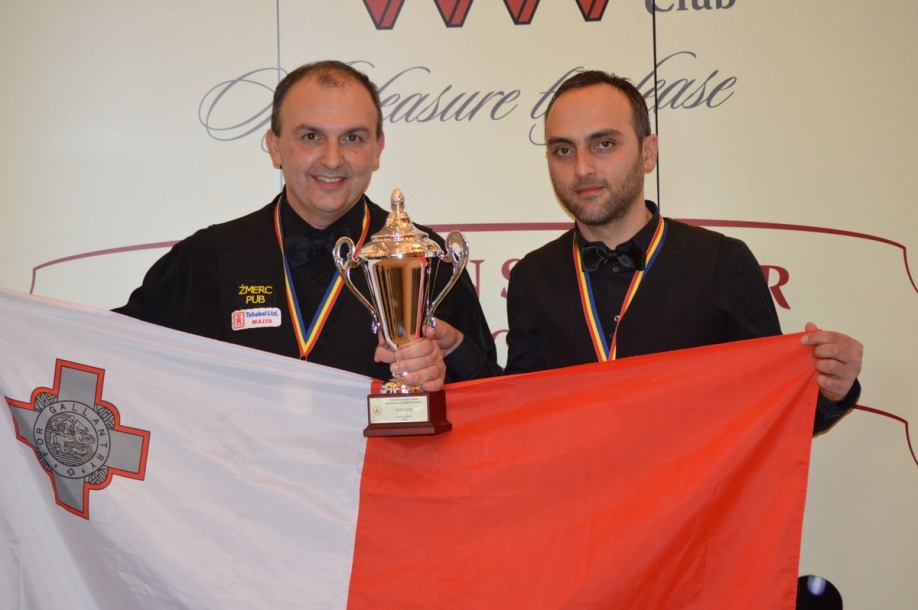 Malta’s Alex Borg and Duncan Bezzina will be aiming to defend their European Men’s Team Champions Title when the event kicks off on home soil in Malta on the 26th of March.

The closing date of the 8th of February is fast approaching but we already have some of the team lists which include some strong Maltesse sides including the champions who will be joined by two more mens teams one of which will include Tony Drago. Drago will join young Brian Cini who also plays in the Under-21 Championships the week before.

They will be joined by last years finalist Nick Jennings who will be partnering Ryan Causton this year in what will be one of the two strong English sides. Ireland will also have a very strong representation this year with Rodney Goggins and Brendan O’Donoghue playing together while Robert Murphy and Irish Champion Mick Judge will also fancy a good run again this year.

Of the other teams this year we have a lot of younger players represented with the pick of them the strong Polish team of Kacper Filipiak and Michał Zieliński who came very close last year losing out in the semi finals. With over a week to go we will see all the names come in to join the 18 teams already entered to make up what will be a very competitive mens event this year.

In the Ladies section we have eight teams entered thus far with defending champions Daria Sirotina and Anastasia Nechaeva from Russia aiming to pick up yet another team champions title.

The Masters section only have nine teams entered to date but Malta yet again will have a big representation with three teams in the draw so far with teams from Russia, Switzerland, Israel and Ireland in the draw at present with many more expected to follow.

The venue of the Dolmen Hotel is always a favorite with the players and we are sure that this will be a fantastic championships yet again this year and look forward to welcoming all the players, referees and supporters to Malta for both the Under-21 Championships and then the Team Championships in late March.