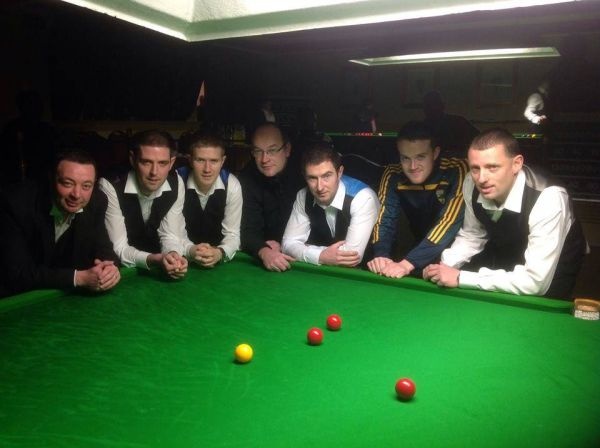 The New Institute Snooker Club in Nenagh won the 2015 Munster Club Championship in the Gleneagle Hotel in Killarney on Sunday with a final frame victory over The Crucible Snooker Club from Cork. The championships are for the Munster Province in Ireland which accounts for about a quarter of the country and consisted of 33 five man teams teams competing over three days to find the eventual champions.
The final was one of the best in the history of the event with great snooker from both teams. In the end it went down to match five to decide the title and the experienced Tommy Gleeson just kept the young David Cassidy out enough to win the match and the title for his club.
Both teams will be familiar to most EBSA international players with Ex-Euro Champion David Hogan joined by the experienced Brendan O’Donoghue and Tommy Gleeson. Masters international Tony Seymore also competed on the team who overcame the youthful Cork side who had Greg Casey, Ryan Cronin, David Cassidy and Daniel O’Regan on their team who have all been regular junior internationals.
Both teams will now travel to Killarney again this Wednesday where they will be joined by the top teams from the other four Irish Provinccial Associations to battle it out for the All Ireland Club Championships. 32 teams will compete yet again over four days on 15 tables to find the All Ireland Premier and Championships Division winners.
Final Result
Brendan O Donoghue 3 v 0 Ryan Cronin
Tony Seymour 1 v 3 Greg Casey
David Hogan 3 v 0 Dean Callaghan
Mark Walsh 2 v 3 Daniel O Regan
Tommy Gleeson 3 v 2 David Cassidy