European Chairman Maxime Cassis officially opened the 2014 European Under-21 Championships here in Bucharest this morning in the superb Caro Hotel. Maxime started by welcoming everyone to Romania and wishing everyone involved a great stay in the capital.

Maxime then asked everyone to stand and observe a minute silence for our long time colleague Jacek Rudowicz who passed away early last week. He then went on to thank everyone involved in organising this event especially Mr Dragos Cozmaciuc who has doing a superb job in brining what now is the third major European event to Romania. 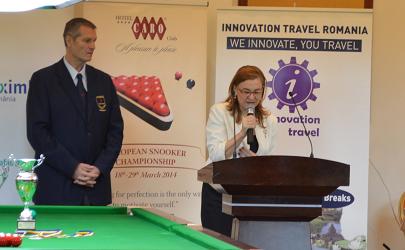 Various dignitaries from the Romanian association and local government then followed, welcoming everyone and wishing them a great event before each individual country was called up to collect their personalised programs.

The referee’s meeting followed the ceremony while the players, families and friends enjoyed the buffet outside the venue in the superb weather. Play will start at 12 noon with the first 16 matches getting underway in the two venues which are split up into a 12 table venue in the main ballroom and a further 4 tables in the small ballroom.

You can keep up to date with all the results right here by clicking on the Under-21 results tab on the home page which will bring you to Dariusz Goral’s superb scoring system which will give you all the match schedules, highest breaks and player profiles.