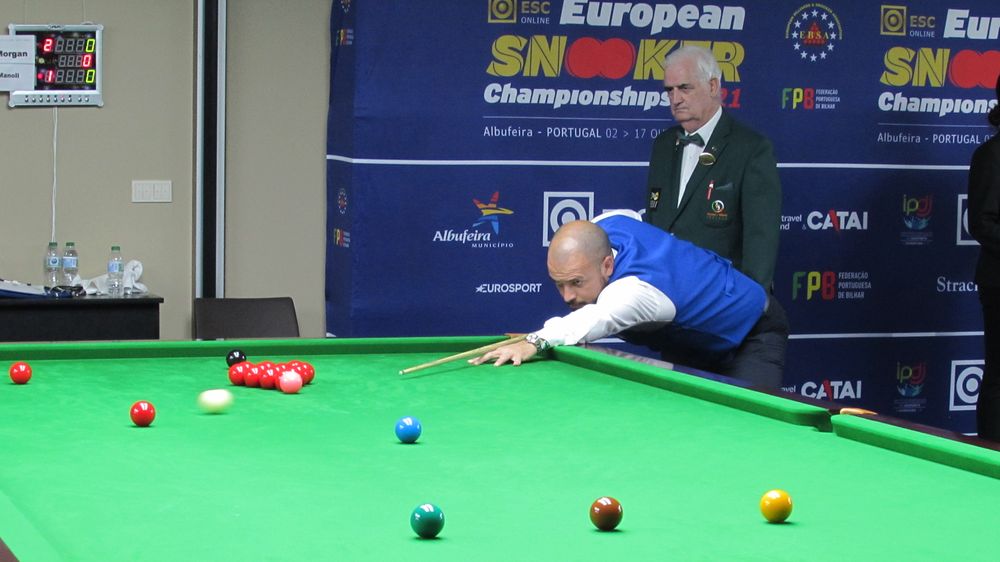 2021 EBSA European Snooker Championships Seniors event Last 40 round matches will be played this Wednesday at Albufeira’s VidaMar Resort Hotel Algarve at the 7 p.m. session still best of 5 frames, like Last 32 round, also to be played this October 13th in Salgados.

It’s the beginning of the knockout stage in the Seniors, the eight top seeds who won their groups at the round-robin stage: go straight to Last 32 round matches still to be played this October 13th at the 8 p.m. session, also best of 5 frames.

Last 16 round of Seniors and Women events will be played Thursday morning at the 10 a.m. session at Salgados – Seniors best of 5 frames (until the final, and including the final and big clash), Women’s matches to be played best of 3 frames.

The quarterfinals and the semifinals of the Seniors and Women events will be played also still on Thursday – quarterfinals at 1 p.m. and semis at 5 p.m.

Men’s Teams event will start Thursday at 1 p.m. session in Salgados, with 52 players and 26 pairs competing in the round-robin stage, split by 7 groups: 6 groups of 4 teams each and one group with only 3 teams.

Being mandatory to play the all 5 frames in every match, the top two in each Seniors Team event groups get qualified to the knockout stages (Last 16 round).

Women’s Teams event is also on the move: 14 teams (and 28 players) will be playing round-robin stage matches: two groups of 5 teams and one with 4 teams.

The top 3 in each one of the groups with 5 teams and two teams from the one with less teams competing get qualified for the knockout stage (Last 8). Seniors Teams event will also start for 32 pairs, split in 8 groups of 4 teams each one: the top two in each group goes through to the knockout state matches – Last 16 round.