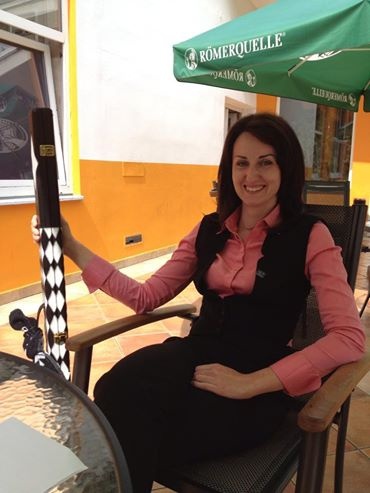 Don’t look deeply into Tatjana Vasiljeva’s light blue eyes, or you’ll get hypnotized fast. The lovely player from Latvia, aged 31, is an inspirational story of dedication to the sport and sacrifices that only a few could stand, like practicing in only half the table because her baby daughter Viktoria is on a blanket, on the table, playing with her toys.

In Daugavpils, 250 km away from Latvia’s capital, Riga, Tatjana «loved pool and snooker since the first moment» she saw a pool table», at the age of 14. But the only table «was in a nightclub only for over 18». So she had to make an agreement with a neighbor who worked there so that she could play there, not being allowed to drink, smoke or even dancing, «only to play pool».

If you think she’s the kind the girl that attended church on Sundays, well, she could not, and for a good reason. She discovered the could get more tables and places to practice in Riga.

«To practice four hours a day, had another four hours by bus each way, from Daugavpils, every Sunday. The first time I saw a snooker table was in September 2000. Tried to pot three balls, and did it. Realised I was born for this, and the teacher told me this was my game. Felt it too. So, here I am, and can’t think of giving up one day. Can not picture myself or my life without playing snooker», says the tender Latvian.

Next step: she realized the knew nothing about technique. Ask her grandfather to get her a job in Latvian Railways in the summer in Riga. So he did, and she moved to the capital and rented an apartment, practicing in Club NB everyday. The definitive change for Riga happened in March of 2001. She met her husband, a big local player too, Vilnis Mainulis, in August. «He asked me to stay living with him in Riga. Was a tough decision. I was 18, he was 33. Left home in Daugavpils and stayed in the capital. My mother did not talked to me for a year, but I manage to finish high school at my hometown studying and having classes after working hours», she revealed us.

Tatjana was accepted in Baltic University to study Public Relations, while she continue to practice and to play: her first tournament was a team’s event in Riga, in 2003, and she got to the semifinals. In October 2006, she went to Llanelly (Wales), to get advised and coached by world snooker champion Terry Griffiths. Twice a year at the start, then two weeks each time, sometimes five.

«Terry did not only changed the way I used to play, he change my life. I realized that my life affected my snooker, and had to restart from zero», told us the Baltic player. Then she got pregnant.

«Knew already it was a girl, named here Viktoria because I was in a semifinal, and promised that if I won that match and reached the final that will be the tribute», says Tatjana, with her eyes dancing in joy.

She almost had her daughter in the snooker table. «I played one final of a tournament in the end of August until 5 a.m., starting at 10 a.m. the previous day. 19 hours in a row, with Tatjana 3-0 up, «getting naturally tired» and, in the end, losing 3-4.

In the new days, she still practices «two hours daily, or four if I have a partner». But still remembers when, with Viktoria still a little baby, always bring a blanket with her to the club, and some baby toys, spread them in the cloth of the snooker table and her daughter played for hours while she was potting balls in the other half of it, practicing like hell but always with an eye on her descendant, who, aged seven by now (born in 2007) «doesn’t love that much snooker, prefers snooker, and not with mummy around».

Tatjana’s inspirational story does not end without underlining the efforts she has been doing for the good of snooker in Latvia. She organized a PTC in 2014 «with success», and another one is on his way, from July 30th until August 2nd. And she’s trying to aim for the sky: having the Rocket there. Good luck, girl! You deserve it.