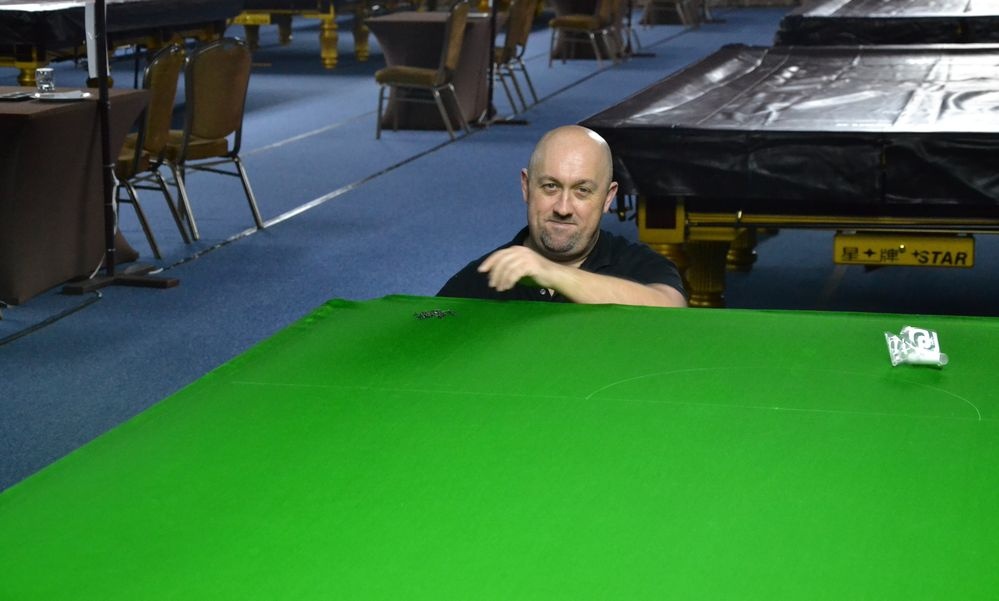 Belgian Pascal Meubis and Inge Vermeulen do the invisible though indispensable hard work of getting the tables at these 2016 EBSA European Snooker Championships perfect everyday.

Five grey marble and composite stones weighing 220 kilos each and cloth manufactured from the finest wool coming from Australian and New Zealand sheep are the main constituents of each one of these 12 feet tables strongly attached by 36 screws.

Belgian city Peer snooker club owner Pascal aged 43 started this owl work 12 years ago. He now has a team of seven people to assist him and became known by supplying the world’s most titled Three Cushions billiard player and fellow countryman Raymond Ceulemans.

45 minutes is the average time that it takes for Pascal or his 31 years old assistant Inge Vermeulen to dismantle a table has as happened this dawn on Friday.

Just a regular working shift for the two professionals who are used to working by night when the players sleep. They have just dismantled 10 of the 18 tables which were at the Haston City Hotel during this 2016 EBSA U21, U18 and Men European Snooker Championships.

That was the surprise they had prepared to the players this Friday morning: a renovated visual of the arena now already with only eight of the ten tables initially placed last February the 7th.

From this Last 16 round until Saturday’s night Grand Final of the Men’s event, there’s much more comfort for the players and the fans.