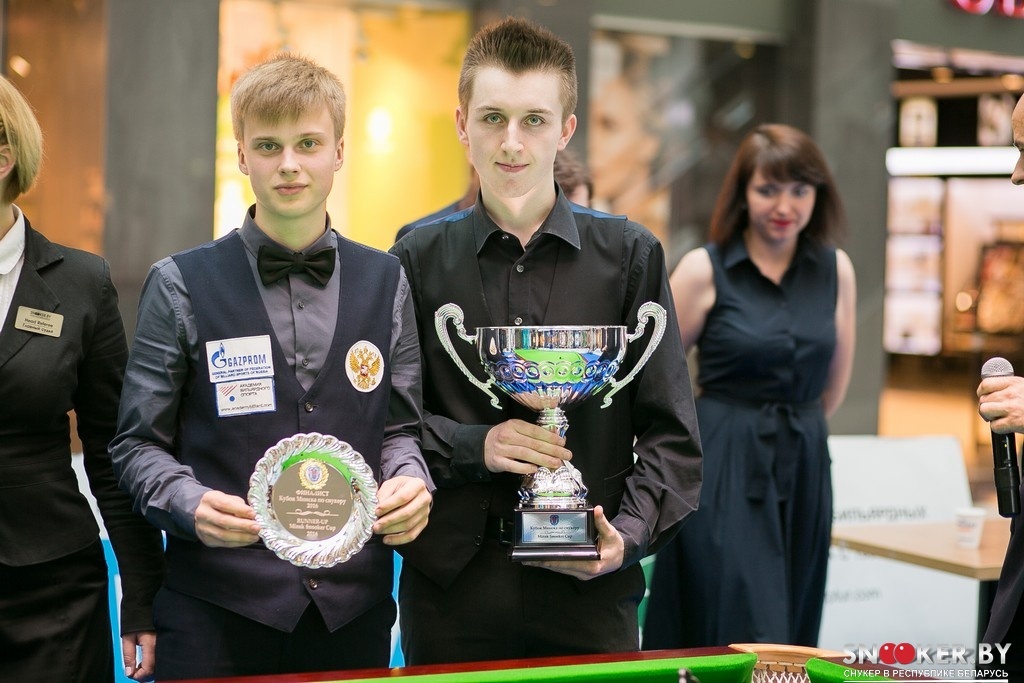 It’s the second time when foreign player won this trophy. The only other player who did this was player from Poland, Grzegorz Biernadski in 2014. In the final of this year’s Minsk Open Jeff Jacobs beat Ivan Kakovski from Russia 3:1. 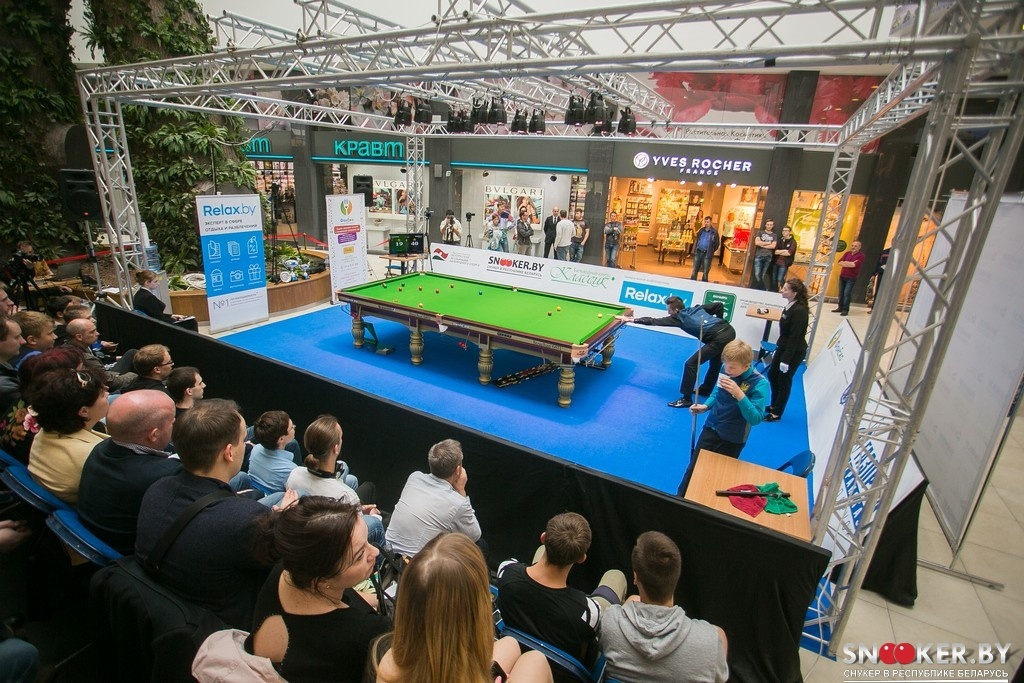 Final day of championship was held in shopping center Arena City, the venue of semifinals and final. Of two matches of semi-finals the most interesting was game of Ukrainian rising star of snooker, 10-years-old Julian Boiko and the main favorite of the tournament Jeff Jacobs. Belgium player didn’t show his best game in this match when Julian had applause from the crowd after almost every shot. An important moment in this match was in the fourth frame when Julian Boiko needed a snooker. He managed to make a snooker but didn’t get points. Luck was on Ukrainian boy’s side as Jeff Jacobs potted last pink ball with white ball next. After that Julian potted difficult pink and won the black ball game and score become 2:2. In deciding frame Ukrainian player was down in points and Jeff Jacobs didn’t give any chances. Match finished 3:2 to Jeff Jacobs. 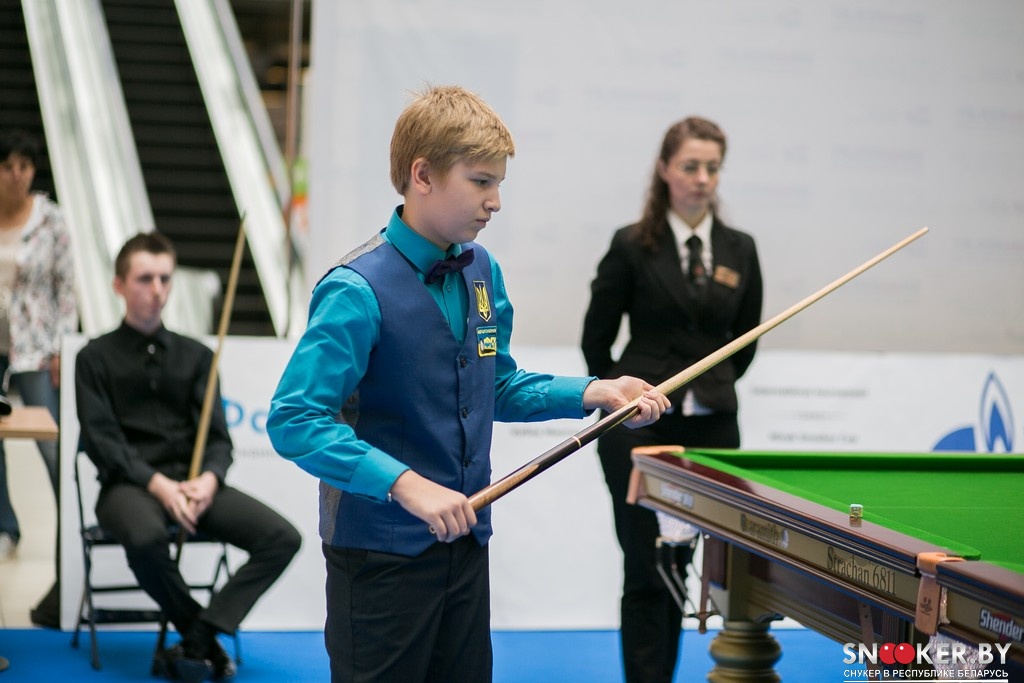 The spectators, by the way, were disciplined and showed knowledge of the game. They were actively discussing what happened on the table and compared Jeff Jacobs with Mark Selby. The spectators also showed their knowledge of the game between matches: organizers arranged small quiz with prizes. It was also deciding frame in second semifinal between Belorussian Vladislav Kalinovski and Russian Ivan Kakovski. This match was very close, also due to the fact that the players were nervous to perform in front of a large audience in unusual place. 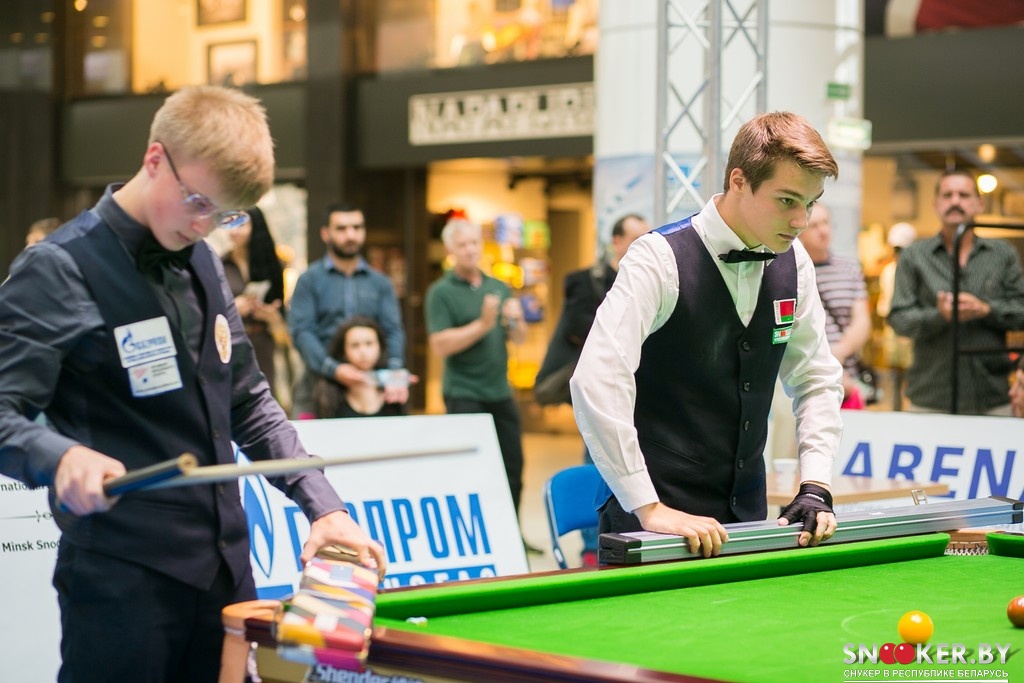 During the match it was a long time without potting any ball but viewers stayed in their places and were interested in the conclusion of the game. Ivan managed to cope with his nerves better than his opponent and won the deciding frame. The final score was 3:2.

The final of championship was fully controlled by player from Belgium. To this time Jeff adapted to the audience and table and he showed game that everyone expected from him. Jeff didn’t make some big breaks but he potted some good balls and people was excited to watch this game. The audience mainly supported players from Belarus and neighboring countries like Russia and Ukraine but all players were applauded for good shots. Ivan Kakivski won only one frame in the final and saved himself from a whitewash defeat. Jeff Jacobs looked very confident and succeeded almost every shot which he planned. 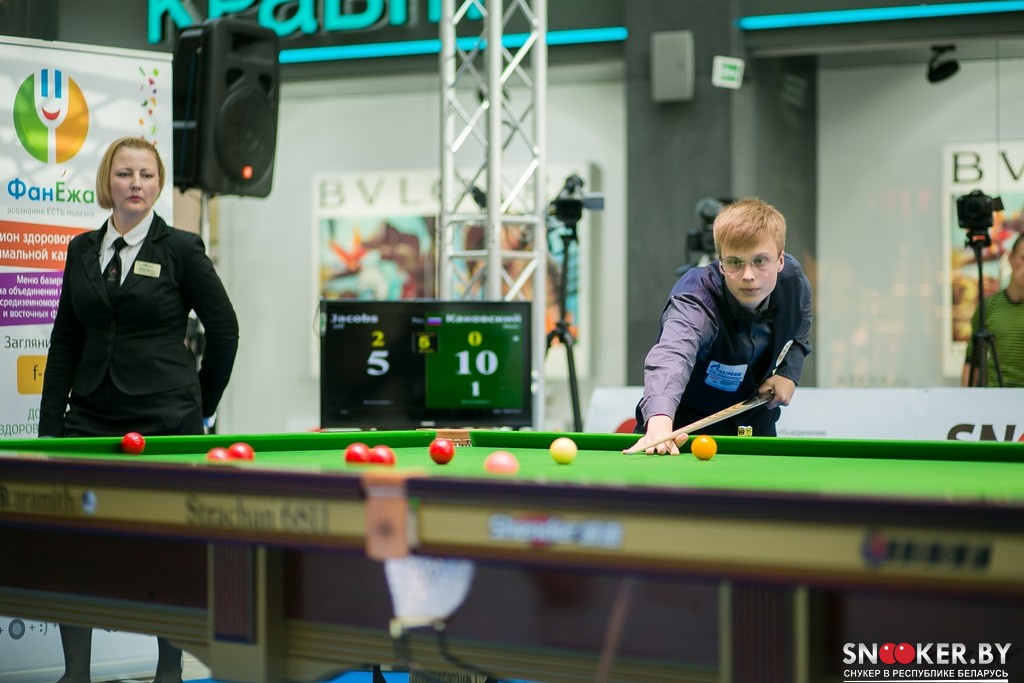 The result of the final was 3:1 and the trophy of Minsk Open 2016 went to Belgium. After the game, the new champion admitted that he was given a hard time, but he played well in the finals. “The semi final was really difficult, I played bad and my opponent played well, especially considering he’s only 10 years old. It was a really close game, I’m glad to have won it in the end. In the final, I played well in the final frame taking a good lead. My opponent had a chance to come back but didn’t manage to score many points, missing a black off the spot, as I won the frame.” At the same time, Jeff Jacobs did not feel increased pressure from the public eye. He was more worried about not reaching 100% of his game. “The viewers attention did not distract me. I’m used to having many viewers in my matches in Belgium so that wasn’t hard. I was nervous to make big breaks as that was expected of me and I’m a little upset that I didn’t show my best game in Minsk, so I hope to do that next year.” Also the winner of Minsk Open 2016 noted that this victory for him is very special and different from the triumph at home: ” To win the tournament in a foreign country is more emotional, it’s a different feelings, it’s something special”. 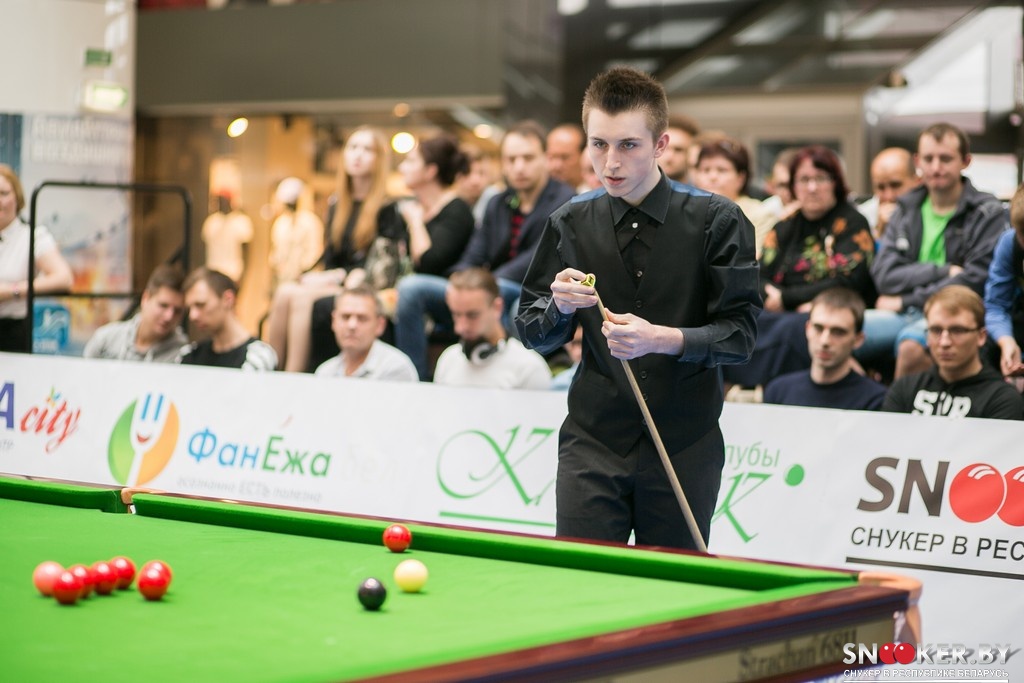 The finalist of the tournament Ivan Kakovski also admitted that he didn’t show his best game in the final day: ” In the semifinal we both played not good, at first I was playing bad and Vlad played good and then game turn around and I started to play better, maybe sometimes I was a little lucky. But in general Vlad played well. Of course, there was pressure of the audience when you know that you should show something to them, but this pressure become more when you start to miss balls or when you can’t do something. I was scared of this”. 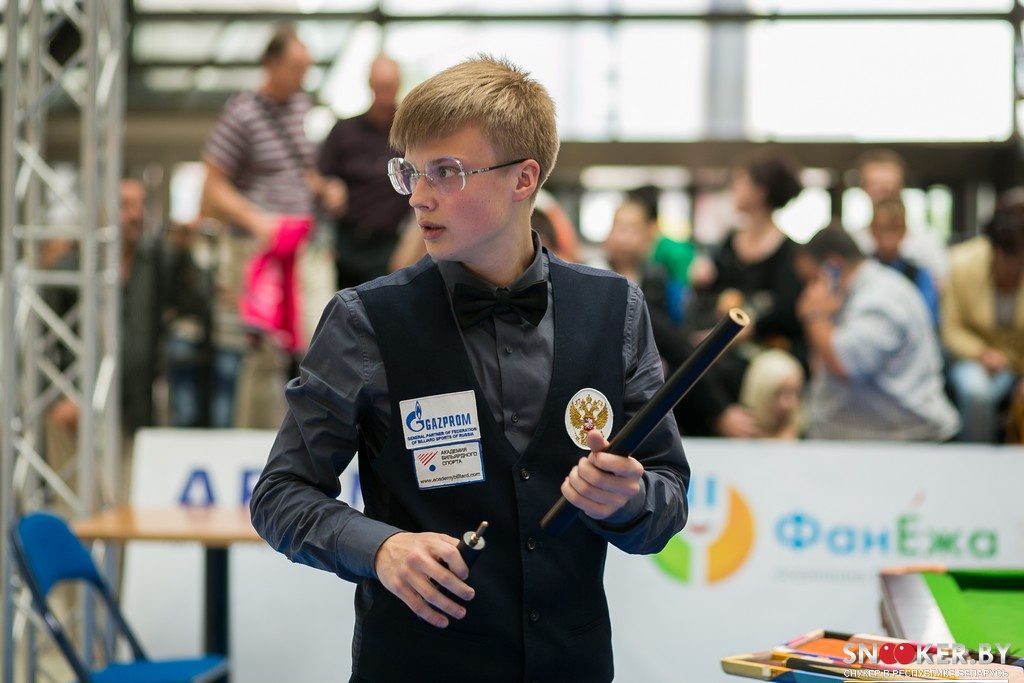 But in the final Ivan encountered another fear – a very strong opponent but as champion of Russia said he’s happy with silver medal: “In the final I didn’t make enough from my chances. Maybe it’s also because of pressure, I couldn’t pot anything. Maybe it was pressure from playing in the final with good opponent. Arena and other things was perfect, thank you to organizers. I’m happy with my result but I regret about not showing my best game”. 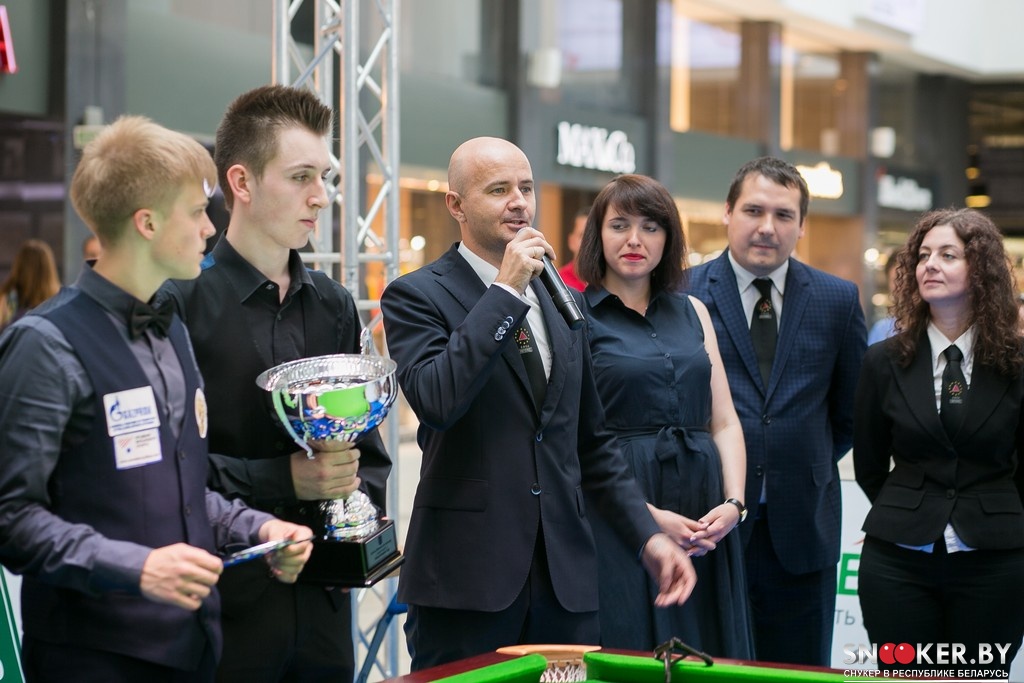 The players liked this idea to make the final day of tournament in shopping center and also they were happy about nice Shender table placed specially for main games of Minsk Open. After the closing ceremony, winner gladly took photos with trophy and spectators. From this year the big trophy will stay in Belarus and the small copy of it Jeff Jacobs will bring home.