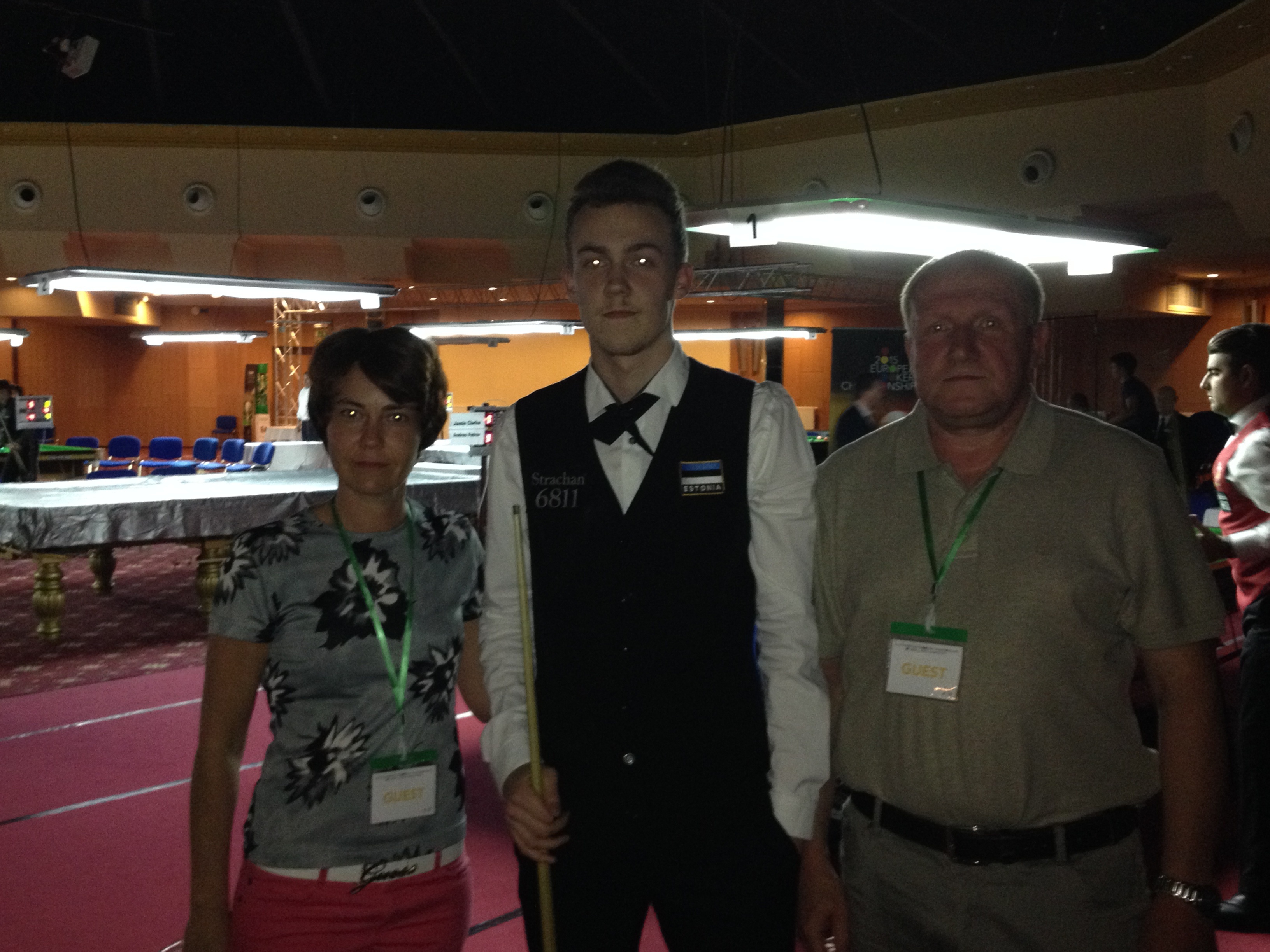 Andres Petrov is already, not matter what will happens and if he wins or not the semifinal the Estonian player is having this Friday facing Jamie Rhys Clarke (Wales), one of the biggest revelation of this 2015 Men European Snooker Championships in Prague, after he washed-up (5-0) Kacper Filipiak (Poland) in quarterfinals.

With his mother, Alla, and his father, Boris, on the seats of the Top Hotel arena supporting him. «We came by car from Tallinn. It’s 2.000 km, was a two days driving in our Renault Van since our city, always my father driving, even if I have the license, too. My mummy does all the administrative work for me to play snooker», told us a sensational player

Andres started to play snooker «five years ago», when he was 14. Until then, he played Pyramid, or Russian Billiards, quite popular in eastern countries (15 white balls and only one red in the table). «Fall in love with snooker watching 2006 World Championship Final, yes, the one late night show between Peter Ebdon and Graeme Dott, but only started practicing in November 2009», says a teenager «over the moon» being one of the semifinalists.

«If I win it? I don’t want to think too much about it, I better not. My goal was to come to Prague, play some won some matches and have fun as much as I can. I’ve been Estonian champion for the last three years, since 2013, but this is another level», told us Petrov, who already achieved the maximum break (147) in practice seven times.

While the world opens his mouth and wonders where this prodigy come from, he stills struggle to increase snooker level in the Baltic country, where, says the Estonian star, there sould be a total of five clubs and 70 snooker tables, five of them at the club he usually practices, Baribal, having 25 years old Alex Meitmae as usual partner.

«I have a table at home, a Dynamic one. Was on my way to Under21 European Snooker Championships, in Malta, in March, but got stuck in Tallinn by Germany air company strike. Was sad. But I’m here to show my stuff, hope it continues to work out just fine», says a giant youngster, who’s easiness and speed clearing the green cloth is impossible to ignore.

Andres just finished high school and wanted to attend Tallinn Business University, but a possible win in Prague, and a ticket to play on the main tour, among the professionals and aiming for huge piles of money, is already at sight.

«Now I want to become a professional. Perhaps will delay my studies. This is my dream. I love snooker, love to see Ronnie O’Sullivan at his best, but also keen on Neil Robertson ad Mark Selby. Trump is also awesome, but he wasn’t confident in Sheffield this year, I suppose», told us Andres, who won Estonian national championships last month, 6-4 in the final «and playing awfully».

Now, Andres just wants to «enjoy the moment». He had exams to complete high school. «Generally I practice three hours a day, five to six days a week, but I haven’t been playing that much because of my studies. You think I was good with Filipiak, and very fast cueing? I know I can do better, yet, that was not my best. I still have more to show, batteries are not unloaded», concluded a confident and happy youngster.