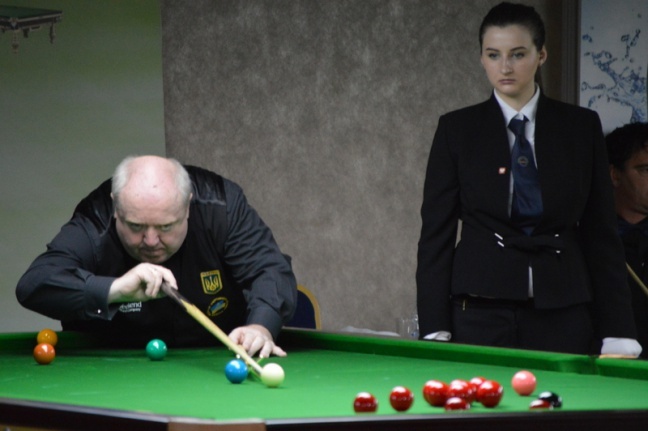 In the Masters Section this morning Ukraine’s Alan Trigg won 3 frame to nil against France’s Thierry Thenaisie with a help of a 48 break in the first frame. The Leeds native keeps his unbeaten run in Group B with three wins out of three and is now joined with three wins by Welshman John Terry who picked up a 3-0 victory this morning beating Richard Kornberger from Austria.

Elsewhere in Group E we had three matches on the schedule this morning and Belgium’s Yvan Van Velthoven kept his unbeaten run with a solid 3-0 win over Viktor Myroniuk with a great 70 break in the third frame.

Finland’s Esa Oikarinen is keeping the pressure on Van Velthoven however after he picked up his third win of his campian thanks to a 3-0 win over Viktor Myroniuk from the Ukraine with breaks of 65 and 60 in the final two frames.

The other match in this group saw Vadzim Shut and Doron Lavie go all the way to the decider with Lavie taking the final frame 46-27.

There were two other matches in the Masters this morning and we saw Ireland’s Mark Tuite pick up his third win after he saw off the challenge of Mindaugas Maisiejus from Lithuania 3-0. The final match saw Rune Kampe and Dean Thomas go all the way to the wire but it was Kampe who came out the 3-2 victor.