Defending champion Tatjana Vasiljeva didn’t have it all her own way this morning in the Group A of the Ladies Section as she had to dig deep to fight back from 2-1 down against Poland’s Malgorzata Sikorska.

Sikorska started well going 2-1 ahead and despite knocking in a 33 in the forth frame Vasiljeva took the frame to draw level.

The champion then had to hold her nerve to win the final frame on the black ball to retain her undefeated status with five wins from five and stay ahead of Diana Stateczny who has four from four so far. 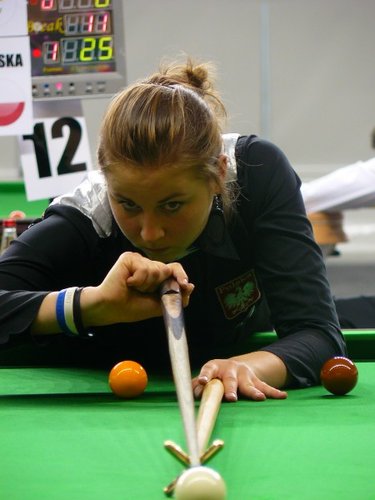 In other matches in this group Dalia Alska won her first match of the group with a 3-2 victory over Tetiana Prokopyszak from Ukraine again having to come from 2-1 down to keep her in with a chance of qualifying.

The last match in the group today saw Nikoleta Nikolva from Bulgaria beat Olga Ustinova (Russia) 3-0 for her second win.

The only other group game this morning saw Poland’s Agata Czerwinska (pictured) win her first match of the tournament in Group D thanks to a 3-0 result over Natalia Nowak keeping her in contention for a qualifying spot with two matches still to play.