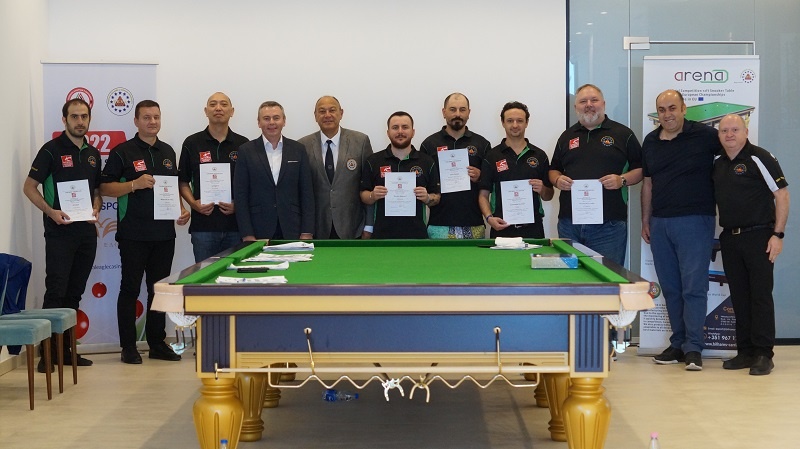 The successful course was held in the Hotel Tanushaj in Albania for seven nominated coaches from all across Europe from Sweden, Croatia, Italy, Armenia, Albania and Bosnia and Herzegovina.

The EBSA Coaching Course is a four-day intensive training course which is only open to recognised coaches who are approved by their own National Governing Body.

The seven nominated coaches were, George To from Sweden, Alexander Werner Sabljak from Croatia, Myqerem Dervishaj from Albania, Elvis Cehajic from Bosnia and Herzegovina. Ali Jalali from Armenia, Dorjan Maknori from Albania and Leonardo Quimari from Italy.

PJ said ‘’It was great to see new countries wanting to send their coaches for training and all of them have the passion to help grow the game more in their country. We are delighted to have seven more EBSA coaches join our EBSA team and help the EBSA grow the game all around Europe.

The coaches also attended a one day online WPBSA seminar on Child Protection with WPBSA head of Coaching Chris Lovell. The coaches will now receive equivalent grade to the WPBSA Level 1 Coach so they can begin a pathway to level 2 WPBSA Coach in the future if they wish.

The new coaches will create a training program and manual in their country to help train and guide the players. The coaches will now begin their probation period where they will complete all the necessary assignments to graduate in becoming a fully accredited EBSA Coaches later on this year.

The EBSA have 90 registered EBSA Coaches approved by the NGB from 37 countries with full EBSA accreditation promoting the game all around Europe which goes well for the future of the game all across Europe.

PJ thanked EBSA President Maxime Cassis and WPBSA Chairman Jason Ferguson who was on hand to present the coaches with their certificates on the final day of the course here in Albania.

EBSA would also like to thank Chris Lovell and all the WPBSA Team for holding the online seminar for our coaches. PJ wished the new EBSA coaches the best of luck in developing their coaching skills and completing their homework assignments in graduating as full EBSA Coaches later this year.