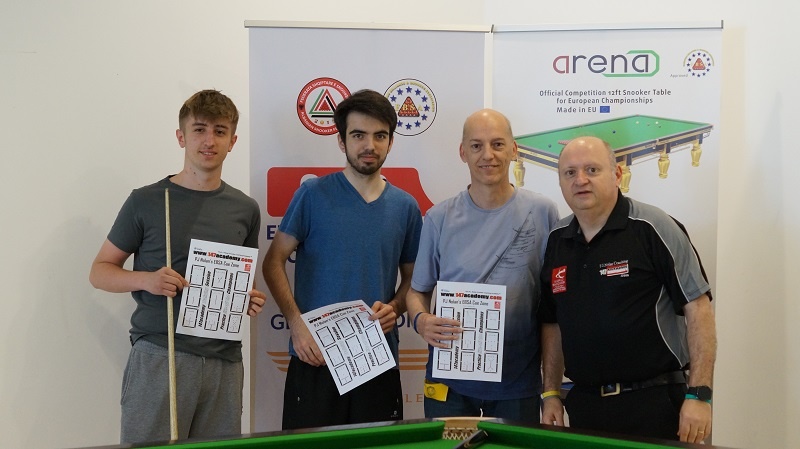 The final day the PJ Nolan EBSA Cue Zones was held today on the 17th of June in the Hotel Tanushaj in Albania at the 2022 European U-16, U-18, U-21, Men’s, Seniors & Ladies Snooker Individual and Team Snooker Championships.

EBSA Head of Coaching PJ Nolan from Ireland was conducting free cue zones each day from 10am – 4pm for EBSA players who attended this year’s European Snooker Championships.

Other EBSA Qualified Coaches had also the opportunity to hold their own Cue Zones from 4pm – 6pm each day of the cue zones.

PJ worked today with talented players from Ireland, Hungary, Germany and France on developing good fundamentals in their Approach, Cue Action, Stance and Bridge Hand plus on their Break Building Skills. PJ was very impressed with all the player’s commitment and he really hope they enjoyed the session.

Any player / country competing in this year’s EBSA Championship in Albania had the opportunity to book a date and time into the EBSA Cue Zone Schedule for their 30minute solo or group lesson in the Tournament office.

The Cue Zones had been organised by The European Billiards & Snooker Association to highlight the EBSA Coaching Academy.

During the cue zones this year in Albania, players had the opportunity to use the latest coaching and training aids on the market to enhance their sessions like the like the Master Doctor, Str8aim G-5 & SA-2, Chris Henry Balls, Academy laser, EBSA Coaching Balls which help to get the players on the line of aim and develop a smoother stroke in their delivery.