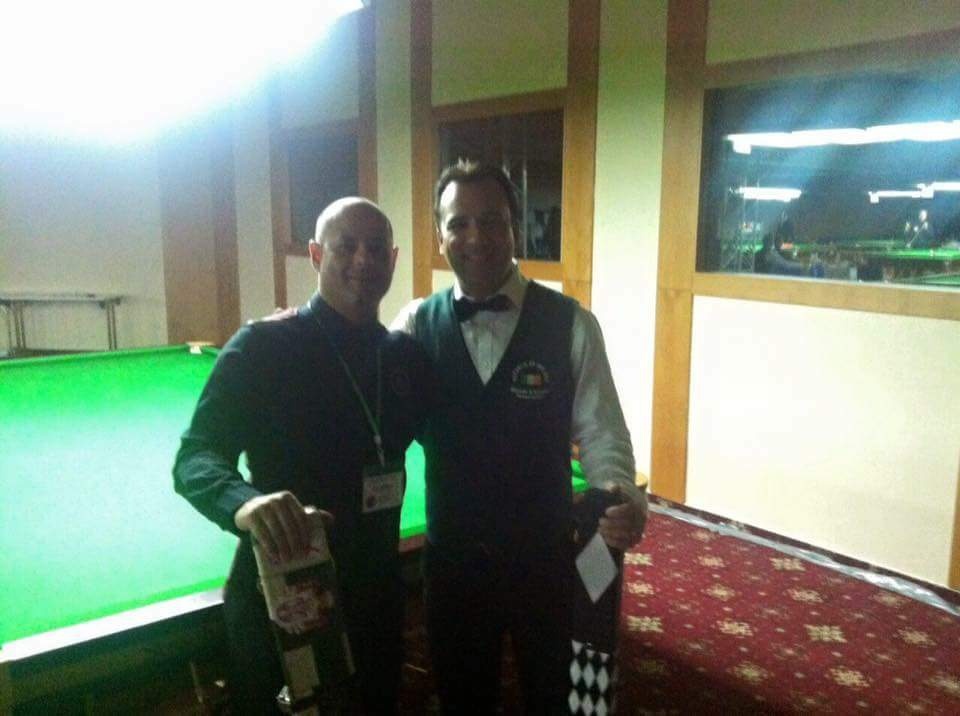 Can you imagine attending the same boys private school and church in London, living just aside the same fellow for five years, playing snooker at the same club but not having a memory of someone who knows most of all your youth friends, and suddenly, bumped into him on a match of 2015 European Snooker Master Championship? Well, that’s precisely what happened to Alen Matic (Ireland, pictured with the pink shirt) and Alexander Kuzmancevic (Serbia, pictured, the one wearing the white jersey).

«We had to play for Group J. In the practice, we started talking and discovered the common points of our livings. We kept talking for so much that, in the end, the referee asked us if we were interested in practice or not», told us Alexander Kuzmancevic, aged 42, known as Sacha, with his eyes still shining of joy, even if Alen Matic, aged 44, beat him in the table (3-1).

«It’s unbelievable. I was one year ahed of Sacha in Lattymer Upper School, in Hammersmith, and managed to make it two years of school in only one year, advanced. We started talking on the table, and last Monday night we’ve talked for three hours. This guy remembers all our charismatic teachers and common friends. I still don’t know how didn’t we know each other, attending the same school from 11 to 16 years, and not having the smallest clue of each other during 25 years», added Alen Matic.

Matic, born in London but representing Ireland for a long time (his wife is irish) now lives in Manchester, Kuzmancevic, also born in London, lives em Belgrade, where he owns the biggest snooker club in the capital (eight tables).

«We even used to go to the same church, St. Nicholas, orthodox. I lived in Shepherds Bush, Alen in Actdon, which is just to bus stops ahead. And attended the same private only boys school. I thank snooker for gathering again after a quarter of a century later», says Sacha.

But the paralel lives and the story of two fellows does not end here. Such as the contact points between them both. «My cousin, Jelena, attended Godolphin and Lattymer School, only for ladies, at  the same time, where Alen’s sister, Natalia, was at the same time, they were friends», reveals Alexander.

«And we use to play at Carlton Snooker Club. How come we never bumped into each other is the most bizarre», ended a happy serbian representative. After a gap of 25 years, and with phone numbers and contacts changed, it won’t be necessary another European Snooker Championship so that they can hug each other and talk about old times. For sure.