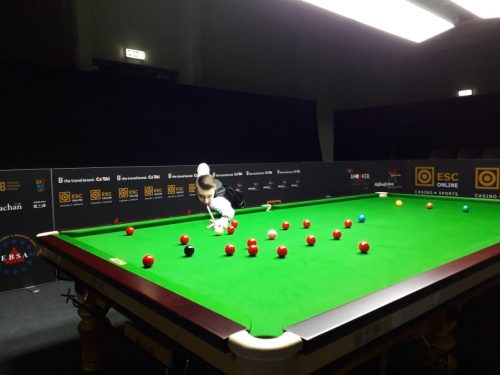 A severe ankle injury does not stop Poland’s champion Antoni Kowalski from setting the pace in U18 European Snooker Championships Last 32 Round matches being played this Monday morning in Albufeira’s Salgados Palace Hotel.

After a 6-4 win over Mateusz Baranowski in the final of Poland National Championship, performing a century in the match, 16 years old Antoni came to Portugal still limited on his right angle. He protects the area with a special boot, ski’s style.

He overcome the pain and bother defeating Germany’s Fabian Haken in their morning Last 32 Round match and already signed breaks of 99, 67 and 53 during the tournament. Kowalski, the new rising star from Eastern Europe’s country, will face Scottish Dean Young in what promises to be a spectacular quarterfinal of the U18 event, starting 2 p.m.