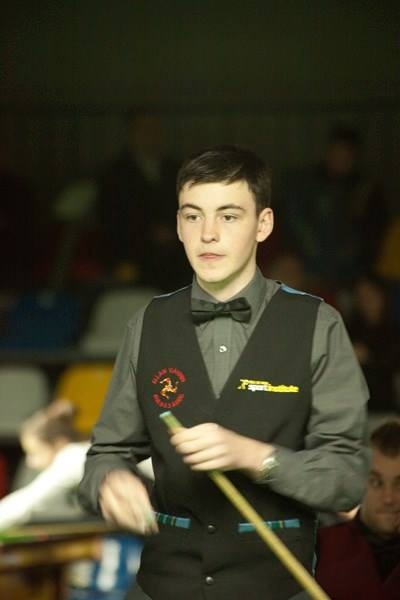 Darryl Hill become the fourth semifinalist of U21 Snooker European Championships by beating israeli Shachar Ruberg 5-2 in the last quarterfinal to end at the Dolmen Resot Hotel, in Malta.

The youngster, born in Leeds but living close to island’s capital, Douglas, from the Isle of Man (between England and Ireland), where 80 thousand people live, just follows the footsteps of  cycling local hero Mark Cavendish and repeats 2013 presence in last four. Two years ago, he lost to James Cahill, but now he wants to win and succeed his good friend Oliver Lines as European champions.

His mother, Jane, assisted the match, while father, Jez Hill, stayed at home suffering by the 18 years old son who wants deeply to become a professional. «I play since I was eight, at nine won my first event. Having a table at home helps», told us a serious candidate to win the event.

But to ge in the grand final (to be played best of 11 frames), next Thursday (14 hours local time in Malta, 13 hours in the UK), he still will have to beat german Lukas Kleckers tonight, in the second of the semifinals.

Scottish Dylan Craig and english Louis Heathcote already started to discuss the other place in the final at the Dolmen Resort Hotel, in Malta. Once this match is over, Hill and Kleckers will play the second semifinal.