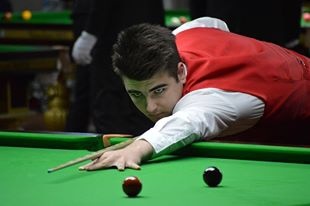 First century break of this Euro U-21 Euro Championship was claimed by the Scotland’s Dylan Craig with a superb 102, showing their opponents we might me an undergod for the individual competition, that started saturday in the Dolmen Resort Hotel, in Malta, and will end next thursday.

Dylan deserves first big clap of the event, in the accountancy of the first day: the scottish added also another good break (85 points). But all the appointed favourites to become european champions, raise the cup and win the chance to play in the main tour with the professionals for the next two seasons, have already shown their teeth and that they’re not in Malta just to earn some experience: they will go for the jackpot. It’s the case of the Welshman Jamie Clarke: breaks of 71, 65 and 58 in the first day are a good statement.

Runner-up in 2014 and celebration, as any irish today, the nations’s victory in the Six Nations Rugby tournament, Josh Boileau wants do improve from last year, when he lost the golden ticket in the final, to Oliver Lines: a break of 58 is a sign that this time the Irish goes for the full picture.

The latest of top three named favourites in betting houses to win this tournament and become old continent’s U-21 king for a year is polish rising star Kacper Filipiak, who started playing only this Sunday. But the blonde from east knows already that he’ll have to try harder: everyone knows is one of the man to beat, and the other candidates started throwing the dice already. But the train of the favourites still stand for one more coach. It’s up to Filipiak to prove it. And he started with his left foot, loosing 0-3 to Belgian Derousse.