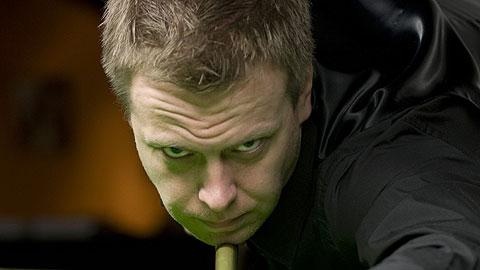 Robin Hull is safely through to the semi finals later today but only after the fight of his life against Belgium’s Peter Bullen who fought him all the way to the deciding frame. Bullen indeed led for most of the match going 1-0, 2-1 and 3-2 ahead only for Hull to take the sixth frame with a break of 69 and then go 4-3 ahead.

Bullen took the next frame with ease to force the decider but Hull’s break of 51 helped close out the frame and match and he will now face England’s John Whitty who won 5-4 against Ireland’s Robert Murphy after coming back from 4-3 down to take the match and reach the semi finals.

In the top half of the draw Welshman Gareth Allen opened up very strong against David Lilley of England with breaks of 88 and 89 in the first two frames. He extended his lead to 4-0 before Lilley clawed back the next two frames but it was only a matter of time before Allen closed out the match which he did 5-2 to reach the semi’s

Allen will now play Roy Stolk from the Netherlands who beat Malta’s Duncan Bezzina 5-1 with top runs of 58 and 69 as he continued his fine form in the event.

The semi finals of each event will start at 4pm local time.