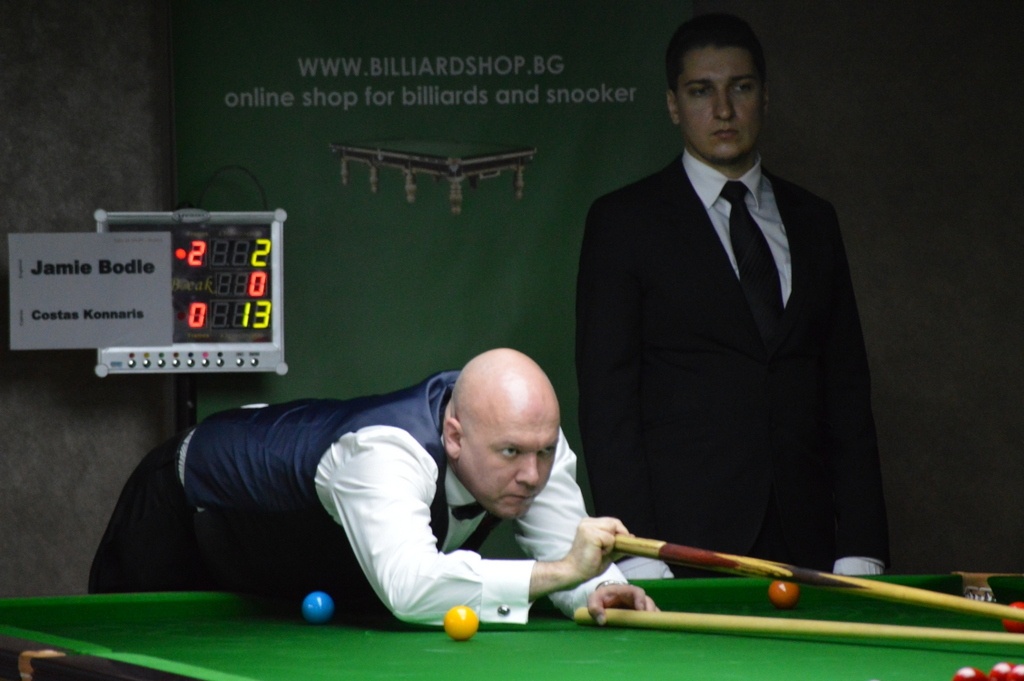 We had some great matches in the Masters section here today and we now know the full quarter final line-up for tomorrow morning. No.1 seed Jamie Bodle from England defeated Cypriot Costas Konnaris 4-0 and he will now face Ireland’s Tom O’Driscoll who came through a hard fought 4-3 battle with Welsh player Gavin Lewis.

Making up the top half of the draw we will see Ukraine’s Alan Trigg face off against Belgium’s Alain Vandersteen. Trigg knocked in a 64 break in the final frame of his 4-0 win over Jon Perring of Wales to reach the quarters. Vandersteen made it through thanks to a great 4-1 win which included a solid 71 in the 4th frame against Finland’s Esa Oikarinen.

In the bottom half of the draw Ireland’s Mark Tuite produced some great snooker here today as he ran out a 4-1 winner over England’s Wayne Brown knocking in breaks of 112, 41 and 76 in the final three frames to take the win and set up a quarter final match with Denmark’s Rune Kampe.

Kampe himself was in good scoring mood today also as he knocked in breaks of 55 and 83 in his 4-1 win over the Ukraine’s Viktor Myroniuk.

Last but certainly not least we have Ireland’s Tom Gleeson face off against defending champion Darren Morgan tomorrow.

Gleeson made it through to the quarters after a solid 4-0 victory over Belgium’s Yvan Van Velthoven this afternoon where he will face Morgan who sent the Netherland’s Rene Dikstra out of the tournament 4-0 this afternoon.